And the World Record for the Largest Ceviche Goes to… Mexico? | How to Peru

And the World Record for the Largest Ceviche Goes to… Mexico? 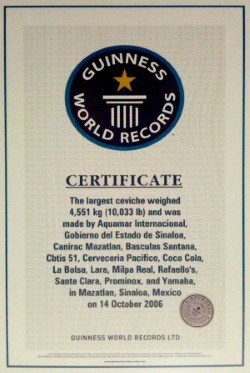 Come on Peru. Ceviche is your national dish; it even has its own national day in Peru. And you stand idly by while Mexico holds the record for the world’s largest ceviche, a record that they have wrestled from lime-drenched Peruvian hands on more than one occasion?

This, surely, is not an acceptable state of affairs…

The Battle for the World’s Largest Ceviche

In the world of ding-dong battles, the quest for the biggest ceviche has been a real donger (so to speak).

Peru, fittingly, was the first country to set the record for the largest ceviche: a very respectable 4.1 tons of fishiness.

In October 2006, however, Mexico stepped into the ring, whipping up a lime-soaked whopper weighing 4.5 tons.

Such an affront to Peruvian culinary pride could obviously not be tolerated for long. The Peruvian response came in December 2008, when about 450 Peruvian chefs and students gathered in a stadium in Callao, all huddled around a 30-meter-long aluminum container, into which went:

The final ceviche weighed an impressive 6.8 tons, more than 2 tons heavier than the previous Mexican record.

A proud Alex Kouri, then president of the Callao region, told reporters: “Today, after almost two years, we’re recovering the Guinness record, which is fundamental for a flagship dish that represents Peruvian gastronomy.” He went on to say that if “any other city in the world … [wants] to beat Callao — if they set a new record — we’re ready to make an even larger ceviche.”

The challenge was clear. And the Mexicans were not done yet — far from it.

On September 4, 2010, in the Mexican state of Campeche, more than 1,600 Mexicans came together to obliterate the Peruvian record. The recipe was slightly different this time, using shrimp as the main ingredient. Altogether, the finished dish was made using:

The final weight of ceviche came in at a mammoth 9.95 metric tons. To this day, Mexico holds the official Guinness World Record for the Largest Seafood Ceviche.

So What’s the Plan, Peru?

But of all the world records that Peru currently holds, the largest ceviche is one that should surely be reclaimed (there’s not so much rush to reclaim the record for the world’s largest toilet roll).

And as long as the ceviche doesn’t go to waste, there really aren’t many negatives associated with one more attempt at the world’s largest ceviche (unless you’re a fish… or an onion). After all, Guinness World Records has a fairly noble goal, to “inspire ordinary people to do extra-ordinary things…. to entertain and inform, and to celebrate the world’s best.”

They also like selling books, sure, but that’s not exactly a crime.

So how about it Peru? That 10-ton mark must be a tempting target, and National Ceviche Day on June 28, 2015, sounds like a reasonable date for once again creating the world’s largest seafood ceviche…

If you enjoyed this and would like to try out a real Peruvian Ceviche cooking class you can check out the options and make a reservation here.