Weapons and Armor of the Spanish Conquistadors | How to Peru

Weapons and Armor of the Spanish Conquistadors

Superior weapons technology was by no means the only deciding factor in the Spanish conquest of the New World. Strategy, tactics, disease, local infighting (the Inca civil war, for example) and even the written word helped the numerically inferior conquistadors overcome the Inca Empire and the Aztecs.

But the superior weaponry and armor of the Spanish conquistadors did certainly provide a distinct battlefield advantage: one which could overturn seemingly overwhelming numerical odds in battle.

The Spanish conquistador force was by no means a uniform, state subsidized military body. These were tough fighting men, many of whom were veterans of European battlefields, but they were individualists. While many had an inherent respect for military rank and order, these soldiers were nonetheless a mixed bag of adventurers and fortune-seekers.

What type of weapon a conquistador wielded often depended on his personal wealth as much as his rank. While wealthier soldiers and members of the nobility could afford horses and fine — or at least respectable — armor, the average soldier would make do with what he could afford or acquire during his career. As such, few Spanish conquistadors looked exactly the same when dressed for battle.

While native body armor provided reasonable protection, the medieval steel sword — when wielded by a skilled swordsman (known as a rodelero or espadachín) — still proved brutally effective at penetrating Inca and Aztec armor.

Conquistador infantry also made use of spears and halberds. Combining an axe blade with a stabbing tip, the halberd was a versatile weapon. Measuring at least six feet in length, it could be used effectively in both defensive and offensive situations. Halberdiers could hold off oncoming Aztec or Inca warriors at greater length, buying time for swordsmen to reform or reposition themselves and for crossbowmen or gunners to reload.

Pikes and pikemen, a standard feature in many European armies at the time, were largely unnecessary in the New World due to the lack of enemy horsemen.

Weaponry of the Conquistador Cavalry

Conquistador cavalry, where terrain allowed, would utilize their lances in an initial charge. The effect could be devastating: native warriors, unaccustomed at first to the sight of horses, would often break and run. If the enemy stood firm, the mounted conquistadors could wreak havoc with their twelve foot lances before engaging with their swords.

Conquistador knights were the most heavily armored troops in the New World, and the most mobile (the Incas and Aztecs had no horses at the time of the Spanish arrival, and therefore no mounted soldiers). But the effectiveness of cavalry depended greatly upon the battlefield terrain, and indigenous forces would learn to position themselves in a way to lessen the threat of cavalry whenever the situation allowed.

Crossbows and Guns of the Conquistadors

The effectiveness of the Spanish arquebus (sometimes spelled harquebus), an early and inaccurate matchlock gunpowder weapon, was severely limited in the New World when used in isolation, simply because of its slow rate of fire.

Initially, the mere noise and smoke of the Spanish guns could break a native charge. But once the likes of the Incas became more accustomed to these new weapons — and adapted their tactics accordingly — they could quickly close with and overrun a group of isolated gunners, especially in a surprise attack.

As part of a combined arms approach, however, the arquebus could be devastating. According to John Pohl in The Conquistador: 1492–1550:

“Guns could inflict horrifying damage on vastly superior numbers, but they took a great deal of time to prepare, load and fire. Able to manipulate their weapons more rapidly, crossbowmen were ideal for providing cover for the gunners. Swordsmen could then deal with the enemy that broke through their ranks on an individual basis.”

A crossbow bolt could penetrate the strongest native armor, and was far more accurate than the arquebus. For providing covering fire for both swordsmen and Spanish gunners, the crossbow was a valuable weapon. It was also easier to maintain than an arquebus in the humid climate of the New World.

Without the means to haul heavy artillery across the New World, the conquistadors made use of their lighter ship-based cannons. According to Pohl, these breech-loading cannons, known as falconets, were “transported inland by the early Conquistadores who remounted them on makeshift carriages or even timber scaffolds.”

As with the arquebus, the noise alone was enough to terrify native warriors, at least at first. With a range of over 2,000 yards (just over a mile), the falconet could be put to good use if the battlefield situation allowed.

But native warriors become more accustomed to the Spanish cannons over time and learned to adapt. As with the arquebus, loose formations and quick advances helped to minimize the effectiveness of Spanish artillery in open battle. More astute enemy commanders and warriors would also learn to predict the projectile path of the cannon and change their approach accordingly.

Full suits of armor were uncommon among the Spanish conquistadors for a number of reasons. The supply of metal armor, especially in the early stages of the conquest, was limited to the weaponry brought from Europe. And most of the soldiers could not afford full plate armor, particularly the infantry. Many foot soldiers, meanwhile, preferred to fight without full armor for greater freedom of movement.

For those in possession of full armor, the hot and humid climate of the New World posed a new obstacle. Not only did the humidity promote rust, heavy full plate armor was also uncomfortable and energy-sapping in the heat. Most foot soldiers were content with sleeveless chainmail vests such as the Jacqueta de Mala or longer Cota de Mala, which left the limbs largely exposed.

Due to both armor shortages and practical considerations, it soon became common for conquistadors to adopt and adapt the native style of armor as used by Aztec and Inca warriors. In Mexico, Cortez had quilted cotton jackets made for his men, copying the standard form of Aztec body armor. This thick cotton armor was surprisingly effective against both projectile and close-range weaponry, while being light-weight and perfectly suited to the climate. Leather jackets were also used as basic protection for the torso.

As for the cavalry, the Spanish conquistadors who could afford horses could generally afford high-quality full-plate armor, too. Conquistador knights, relying on their horses for both mobility and speed, could bear the weight of heavy armor without it sapping their strength or stamina too quickly.

For most mounted conquistadors, being heavily armored was vital in order to successfully charge the enemy under a hail of arrows, stones and spears. Not all mounted soldiers were equally protected, but most would have worn more armor than found on a standard infantrymen. Steel breastplates were preferred over chainmail alone, and many knights would protect their limbs with further sections of plate or chainmail armor.

Helmets and Shields of the Spanish Conquistadors

One of the most important parts of a conquistador’s armor was his helmet, as native armies used a fearsome combination of long-range weaponry and close-range smashing weapons.

Aztec and Inca warriors relied heavily upon slings and arrows at a distance, while closing with hardwood clubs and bludgeoning weapons — all of which could inflict severe damage with a headshot, making a strong metal helmet invaluable.

Spanish steel, and Spanish armor, was some of the finest available in the world. But, as with body armor, quality helmets were something of a luxury for the conquistadors. Simple and often outdated helmets were common, but these were still technologically superior to the head protection worn by native soldiers.

While many Spaniards were left to acquire their own body armor — or adapt to the use of native equipment — Cortez had simple metal helmets manufactured for his men in Cuba.

Conquistador helmets were based largely around the simple chapel de fer or morion design, which offered protection to the head and neck. Common variations included the salade and later the domed cabasset and burgonet.

Traditionally, Spanish knights favored a closed helmet in order to protect against opposing cavalry lances. But the absence of mounted enemies in the New World made the use of open-faced, lighter helmets more popular.

The standard conquistador shield was circular, slightly convex (to deflect blows) and approximately two feet in diameter. While the sturdiest shields were made of metal, others were made of wood or heavy ox hide. Some shields had a metal spike protruding from the center providing a basic offensive capability. 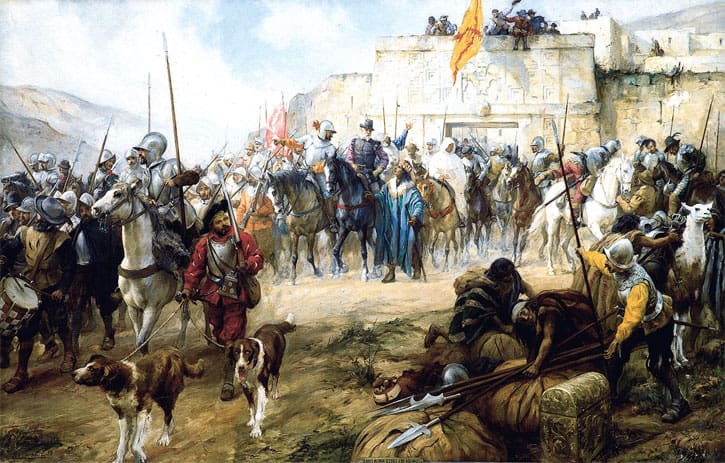 Diego de Almagro leads his conquistadors on an expedition to Chile

Images used in this article are in the public domain unless otherwise noted.

3 comments for “Weapons and Armor of the Spanish Conquistadors”