Recommended Restaurants in Iquitos | How to Peru

If you’re one of those culinary traveler types — or if you just like eating well — then you’ll have a good time exploring the restaurants of Iquitos. It can be an expensive city for food and drink, due to both its isolated location and touristy nature (in and around the city center, at least), but the fish is fresh, the ají de cocona is perfectly picante, and the overall gastronomic standard seems higher than average for Peru.

La Mishquina is a true gem of a restaurant in the heart of Iquitos (Próspero 507). The young chefs, who also take turns waiting tables, work and practice at La Mishquina while studying at the Emilio Romero ISTER Institute next door (the first gastronomy and culinary arts school in Iquitos). The S/.15 ($5) menú ejecutivo — which includes a starter, main course, dessert and drink (read more about Peru’s menús here) — is a little more expensive than others in the city, but it’s well worth the extra two or three soles. This is a place where you can ask for a recommendation and receive a genuine answer from someone who knows and loves the food. 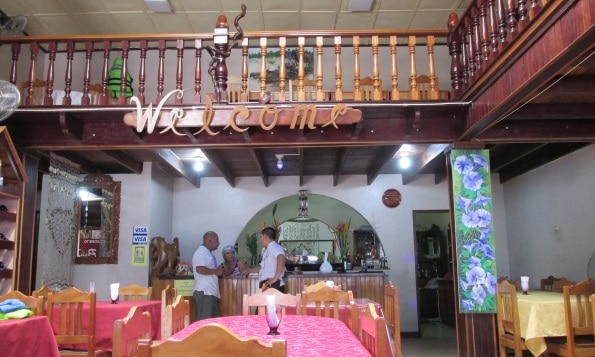 I first went to Restaurant Paulina (Tacna 585) thanks to a recommendation by the volunteers at the Green Track hostel just up the road. I returned because the lunchtime menú surpassed its S/.10 price tag and the general atmosphere was one of calm, family-run efficiency. Along with La Mishquina, Paulina was one of only two restaurants I returned to in Iquitos — and I’d certainly go there again. A real bargain about six blocks from the main square. 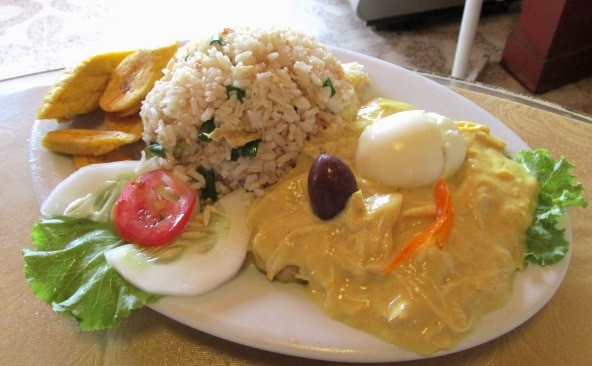 I walked into this tiny little cevicheria (Moore 257) because it looked colorful, comfortable and had a local vibe. And boy, Mr. Panchito really knows his ceviche — even the décor and the pictures on the wall (one of which seemed to show the chef standing alongside Gastón Acurio) show a genuine love for this particular style of Peruvian cooking. I ordered the combo simple, which includes a simple ceviche alongside a chicharrón de doncella for S/.17 ($5.70). The cut of the ceviche, the crispness of the chicharrón and the freshness of the ingredients quickly revealed a chef with no shortage of talent. Highly recommended. 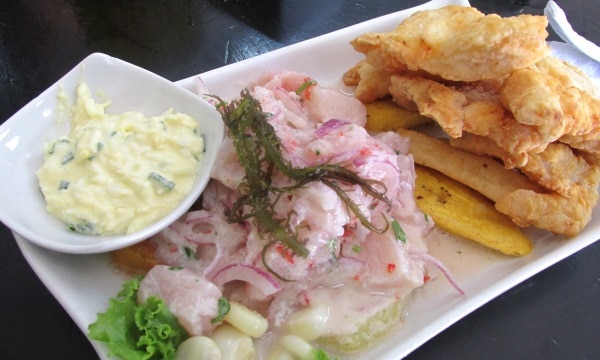 The Amazon Bistro is an elegantly atmospheric Belgian-owned French bistro on the riverside boulevard (Malecón Tarapacá 268). With its wooden balcony, balustrades and fancy electronic menus, the higher-than-average prices don’t come as too great a surprise. But it’s worth buying more than just a coffee (S/.5) to use the fast and free Wi-Fi. The daily lunchtime menú costs a hefty S/.20 ($6.70), but features French-inspired dishes that you’re unlikely to find anywhere else in Iquitos. My soup starter packed a flavorful punch that had me oohing and aahing and stating quite clearly that it was the best soup I’d ever tasted in Peru (which remains true). The beef bourguignon main course was a pleasant plate of Frenchness, but couldn’t quite rival the soup. If you’re looking for a non-Peruvian Peruvian menú with a hint of fine dining, this is the place to go. 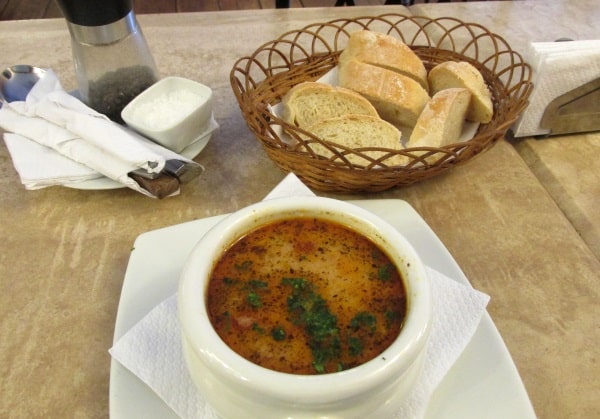 Dawn on the Amazon Cafe

Dawn on the Amazon (Malecón Maldonado 185) is one of the most famous café/bar/restaurants on the boulevard and a hugely popular dining option among local expats and visiting tourists alike. Pricewise, it’s not exactly a low-budget backpacker destination, with main courses in the S/.25 to S/.40 region ($8.50 to $13.50). But the location, the fresh ingredients and the service make it a good place for a splurge, especially if you’re craving international cuisine (the menu features North American, Mediterranean, Mexican and Asian options — try the wantan starter for crispy goodness) or an inventive vegetarian dish. There are also Peruvian options, including lomo saltado and patarashca; I had a fried fish fillet breaded with quinoa, an interesting twist on a local standard. 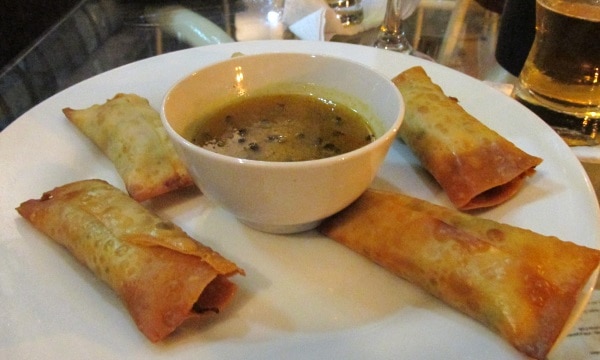 Huasaí Restaurant is another good option for a lunchtime menú in Iquitos, this time located less than half a block from the Plaza de Armas (Fitzcarrald 131). The menú ejecutivo at Huasaí costs S/.13 ($4.50) and includes a choice of starter, a main course and a jug of fruit juice. The starter and main course options include popular Peruvian dishes and some interesting regional plates such as sopa a la loretana (a cecina-based soup of the Loreto Region). The service is functional, the atmosphere is cool and relaxed, and the food seems to be of a generally high standard. An affordable and central restaurant for people too lazy to walk to La Mishquina. 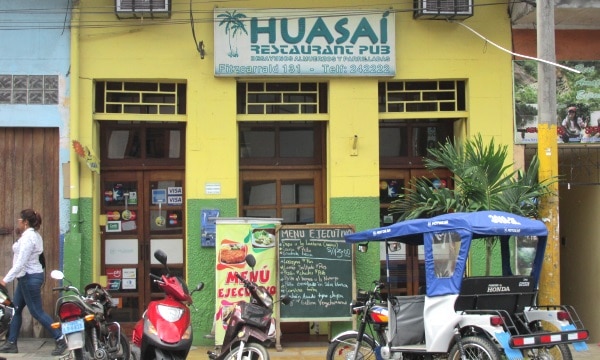 Wooden furniture, low light, local art on the wall and a real pizza oven just inside the front door. Yep, Chez Maggy (Raymondi 158) looks like a good place for pizza — and it most certainly is. Chez Maggy is actually a chain, with seven restaurants dotted around Peru (in Cusco, Aguas Calientes, Chiclayo, Pucallpa and Tacna). But it doesn’t look or feel like a chain, more like a family-run pizzeria, and the pizza itself feels crafted rather than fabricated. Of course, you can order other stuff, like lasagna or Mexican food, by why bother when there’s good pizza? It’s also the perfect place to go after a few beers at the nearby Bodega Bar Judith. 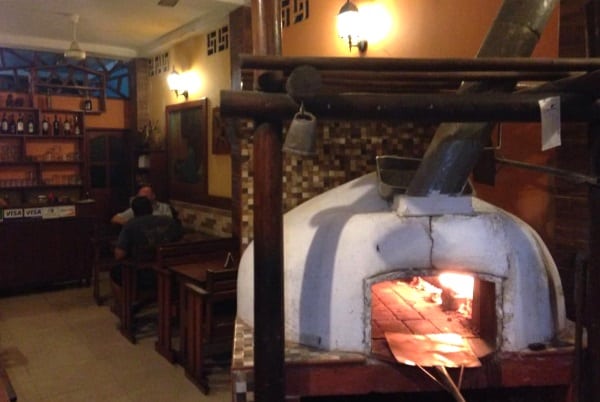 Fish-based combos (combining two or more different dishes on one plate) are very popular in cevicherias throughout Iquitos. And the ceviche with chicharrón combo in Chef Paz was one of the best I had in Iquitos. The ceviche was done in a mildly spicy, citrusy ají de cocona sauce, a beautiful twist on the classic lime-soaked ceviche. The accompanying chicharrón de doncella wasn’t quite to the same standard, but was far from disappointing. At S/.30 ($10), the combo at Chef Paz was more expensive than others listed here, and the restaurant is perhaps overpriced considering the competition. That said, the service is friendly and efficient, there are plenty of dishes to choose from (including ceviche, tiraditos, pastas, Peruvian classics and makis/sushi rolls) and the chef has obvious talent and a sense of invention. It’s also centrally located (Putumayo 468). 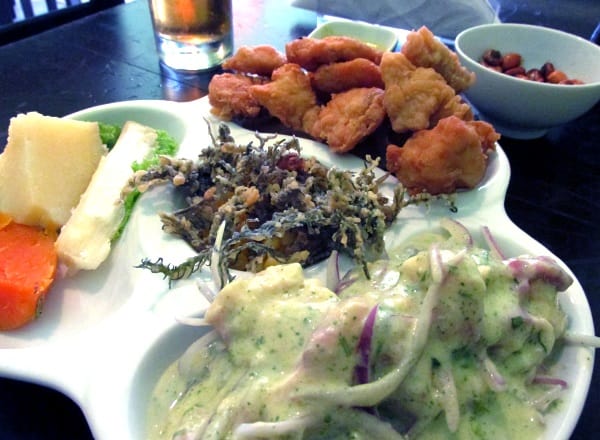 As the (slightly awkward) name suggests, Al Carbón is a restaurant specializing in big slabs of meat cooked on the grill. Whether you fancy a chuleta or cecina, an anticucho or a slice of lomo fino, you’ll find plenty of meaty options here. If you can’t decide, order the parrilla mixta, a sizzling tabletop mini-grill topped with chicken, pork, beef, chorizo and a cow heart anticucho — all for S/.35 ($12) and enough for two hungry adults. Al Carbón is located at La Condamine 116. 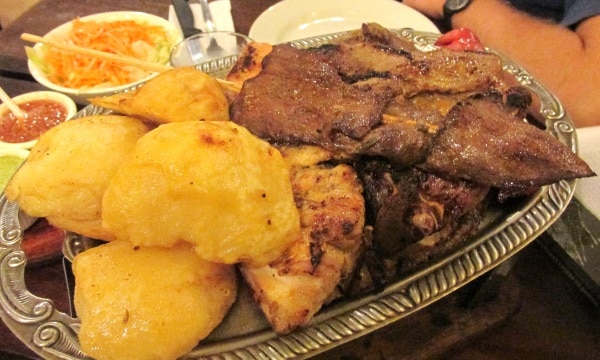 I’ve recommended La Casa Fitzcarraldo as a place to swim, a place to drink, a place for movie buffs and as a place to stay in Iquitos (if you can afford it), and I’ll be writing a standalone article about it in the future. For now, I just want to say that it’s also a good place to eat. Done. 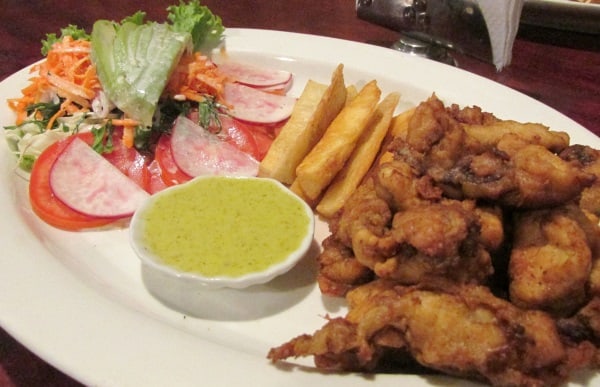 I’m guessing that some locals or people in the know might raise an eyebrow at this recommendation, mainly because Chato’s Burger is a slightly dirty, rather plasticky burger joint that stays open 24 hours a day and successfully serves a range of late night drunks and other wastrels. I must admit that I never ate at Chato’s completely sober, but I consider myself a connoisseur of late night beer food. As such, I happily proclaim their royal parrillero (a parrillero sausage with egg in a bun) to be a true champion in the field. And it’s only S/.7 ($2.40). Given the choice between a burger at Chato’s and one of the frankly dull and overpriced burgers at the far more famous Ari’s Burger and Yellow Rose of Texas restaurants, I’d go with the former. Chato’s is at Samanez Ocampo 140, a couple of blocks up from the main square. 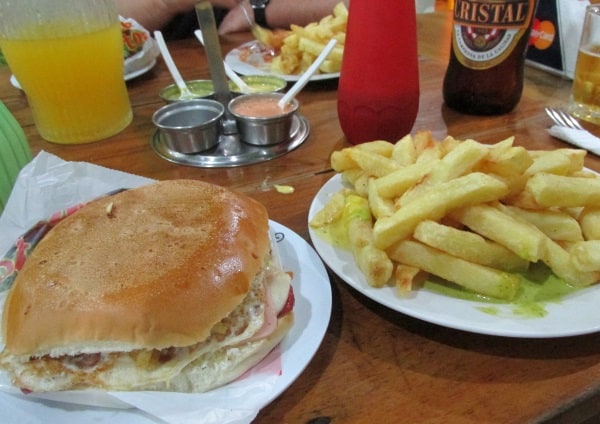 Coma & Punto (Napo 488) is yet another good cevicheria in Iquitos, also offering combos for ease of culinary exploration (and for greedy people, more often). I ordered the combo Coma & Punto, a triple threat of ceviche, chicharrón de pescado and arroz con mariscos. It wasn’t as refined as the combo at Chef Paz, or as much of a bargain as the combo at El Rincon de Panchito, but it did provide a lot of tasty food for a reasonable S/.25 ($8.50). 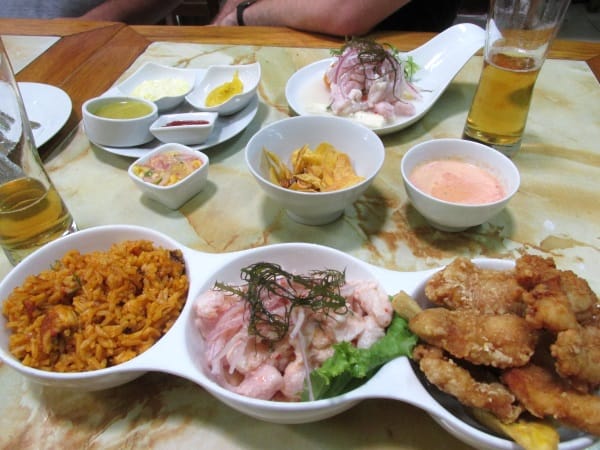 I took the boat out to Al Frío y Al Fuego, had a beer, but didn’t order any food because I was being too much of a cheapskate. But, by many accounts, this fabulous floating restaurant is one of the finest places for high dining in Iquitos. It is, however, very expensive, so might not be a dining option for most backpackers unless they are trying very hard to impress a potential mate. I’ll definitely go there next time I’m in Iquitos, but for now I have no option but to reserve judgment. The restaurant provides a free boat service, which leaves from Avenida La Marina 134-B.

More Recommendations for Places to Eat in Iquitos

If you have a favorite place to eat in Iquitos — or an opinion, positive or negative, about any of the places mentioned above — feel free to share it with us in the comments section below.

Note: Before I go, I just want to point out that one frequently recommended hole-in-the-wall style restaurant in Iquitos — El Sitio — is now closed. Having heard many positive things about El Sitio, both from locals and travel guides like Lonely Planet, I went to check it out; sadly, the Argentine owner had passed away four days previously. As far as I know, it will not reopen.

If this has started your “adventurous” appetite we also suggest you check out FindLocalTrips.com a tour comparison website with heaps of info and all the different options to fill your taste buds.