Eating Ants in Peru: Hormigas Culonas | How to Peru

Forget peanuts, popcorn and pretzel sticks… ants are the food of the future. Well, maybe. But probably not. Either way, eating ants is quite a treat in some parts of the world, Peru included, so it’s tough to turn down a plate of hormigas culonas.

The scientific name for this particular species of large leafcutter ant is Atta laevigata, but they are known by a variety of names across the Americas. In Colombia, you’ll be snacking on hormigas culonas, literally “big-bottomed ants,” while in Central America you’re more likely to hear them called zompopos de mayo, and bachacos in Venezuela. There seem to be a few different names in Peru, including mamacos, siqui sapa and domblos.

Whatever the name, these big-bottomed ants remain as much of a delicacy as they were in pre-Columbian times. The ants can only be harvested at certain times of the year, making them a scarce and relatively expensive commodity. In San Martin, mamacos appear in the markets during October and November, but only after short periods of rain.

The Sensation of Eating Ants

Firstly, these big-bottomed ants are quite large, so ignoring the little details is slightly tricky. If you’re squeamish, you might want to shut your eyes before digging in.

A not-too-unpleasant crunchiness accompanies the first bite, followed by a familiar taste — familiar, that is, if you’ve tried pork rinds (pork scratchings in the UK). To be exact, the taste is similar to pork rinds, but with a woody, earthy flavor somewhere in the mix.

While that doesn’t sound too bad, the aftertaste is not particularly pleasant. The earthy, soil-like flavor lingers in the mouth, combined with a slight oiliness. Now is a good time to have a sip of your favorite Peruvian beer. 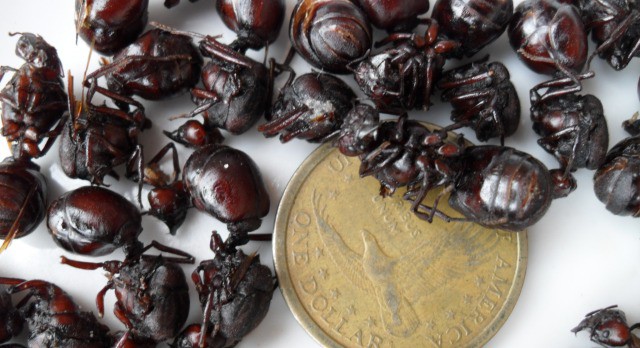 Eating Ants: Legless, Headless or As They Come?

Overall, the ant-eating experience isn’t too bad, but I’ll only make a habit of it if I find myself lost and starving in the middle of the Amazon. After eating about 10 of the poor little things, I had certainly had my fill (and that aftertaste was hard to shift).

There’s still one thing I’m not too sure about: the best way to eat them. When I first came across toasted ants in Brazil, only the body section was on sale — no legs and no heads. In contrast, these Peruvian ants looked like they could stroll off the plate. After eating two or three ants, I decided to remove the legs — picking ants legs from your teeth is just weird. I doubt if that affects the flavor, but legless ants seem so much more palatable…