Caballitos de Totora: Traditional Fishing in Peru | How to Peru

Long before the first Europeans set foot on Peruvian beaches, local people had been harvesting the Pacific Ocean using ingenious boats constructed from readily available materials. This time-honored technique survives to this day, an ancient yet effective form of fishing in Peru. 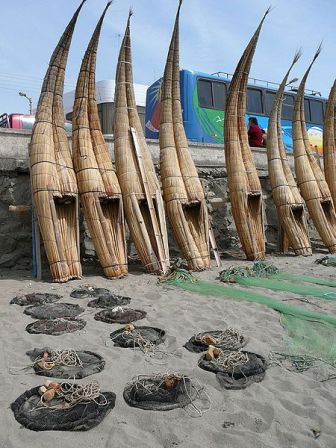 In most of coastal Peru, reeds grow naturally and are planted and harvested as a construction material to build homes and shelters. Reeds are also used for the country’s iconic native boats, the caballitos de totora (little reed horses).

In the north of Peru, at Mancora and in communities near the Ecuadorian border, you will see a different type of fishing vessel. Here, due to the scarcity of reeds, fishermen take to the sea on narrow bamboo rafts.

Caballitos remain a common and identifiable part of Peru’s coastal traditions. Similar craft have also been used for centuries on Lake Titicaca, but these are usually broader beamed and designed to carry cargo.

The Construction and Maintenance of Caballitos de Totora

Coastal fishermen ride their caballitos like a horse, sitting astride them; launching into the incoming surf is not difficult when your feet are on the sand. The riders paddle their caballitos kayak-style with a double bladed paddle, usually a single board of bamboo or wood.

By the nature of their construction, caballitos de totora become waterlogged after a week or so. Most fisherman own several boats, allowing them to dry one craft in the sun while continuing to fish using another.

The basic design of the reed boat has changed little over the centuries, with the exception of some additional modern materials. At the popular beach of Pimentel, near the city of Chiclayo, the caballitos have rectangular stern sections made from Styrofoam. A local angler told to me that this was to give the boat a symmetrical form, and to create a water impermeable floatation compartment in the stern to extend the time between dry-docking on the beach. 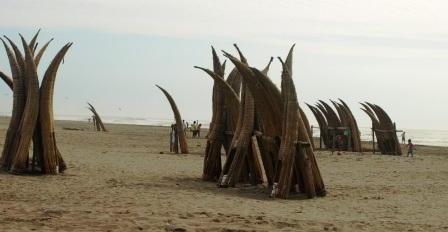 Peruvian fishermen use several techniques when afloat on their caballitos de totora. Often working in teams of two or three, they paddle past the surf before laying out a long gill net weighted and held by floats. This is a job for two or three, after which they go their separate ways, with each man dropping traps for langosta (lobster).

After dropping their traps (baited reed cages held in place by floats), the men then paddle to their bottom fishing spots where they drop hand lines baited with small fish or sand shrimp, or artificial lures. By jigging the lines, the anglers hope to entice red snappers, drum and various other species.

After catching his fill or exhausting his bait supply, each fisherman returns to retrieve his lobster traps. Finally, they rendezvous at the communally operated gill net, where each man takes an end and carefully coils it in, purse-net style so that nothing escapes.

Enjoying the Catch in Pimentel, Peru

The catch from these nets includes many small fish, such as anchovies, sardines or pilchard, as well as occasional larger predators. I witnessed a pair of fishermen bring in an eight-foot hammerhead shark: a remarkable catch to land in a woven reed vessel.

After measuring out their combined catch, the fishermen took just a few minutes to distribute the haul into hand carts for distribution to restaurants and fish shops throughout town. That evening, I enjoyed a mixed grill of langosta, small fish and shark steak – proof of the efficiency of Peru’s time-tested small fishing boats. 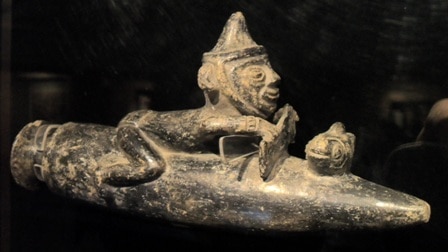 Pimentel is largely off the main tourist circuit, making it an ideal destination for a beach escape. You can rub shoulders with the locals, admire the caballitos de totora and enjoy some of the country’s best surf and seafood. Getting to Pimentel independently is easy enough by bus via Chiclayo.