Located in Southern Peru, Ayacucho is often hailed as a one of a kind destination, effortlessly combining the colors, the history and the adventure that so many travelers revel in on their journey through Peru. Whether you choose to travel with your friends, your family or spend a little me-time getting to know these streets, you will fall in love with the city that locals know as Huamanga.

Originally founded as San Juan de la Frontera de Huamanga (hence the name from the locals), Ayacucho is the capital of the province Huamanga. It is located along the eastern slope of the Andes mountain range at an altitude of 2761 meters. The city has a dry climate, even when you consider the rainy season (from December to March) the sun remains shining all year round. 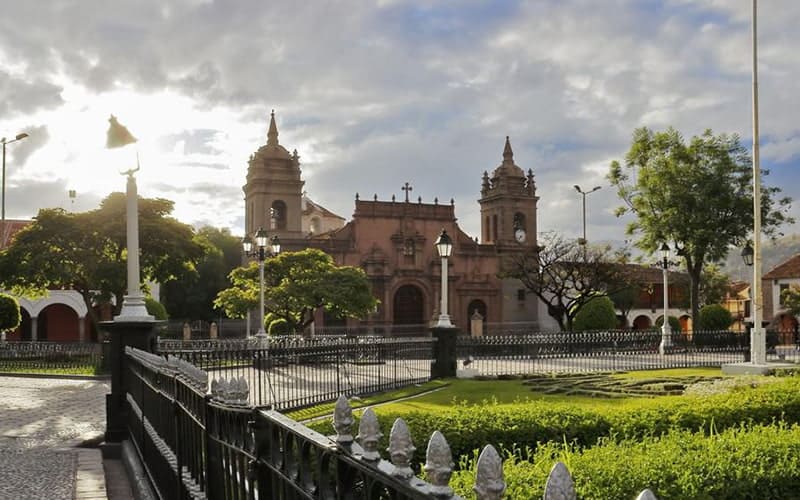 One of the most important artistic and architectural complexes in Southern Peru, Ayacucho can also be known as the City of Churches (Ciudad de las Iglesias), thanks to its number of churches: it has more than 30 Renaissance and Baroque style churches, each adorned with beautiful paintings and intricate wood carvings. If architecture is your thing, you can also check out the many colonial-style mansions and Inca remains that are dotted around the city.

It’s not just the churches that are attracting more and more visitors each year, Ayacucho is home to some truly beautiful and unique traditional handicrafts, even being recognized as the “Capital of Popular Art and Peruvian Handicraft” in 2017. The most famous of these crafts are the alabaster carvings. (Alabaster is known as the stone of the region.) There is also pottery and fine wire jewelry called filigree, which is made in the Santa Ana neighborhood. The most sort after trinket from Ayacucho however, is the retablos, which is a painting devoted to a folk-law, traditionally in a Roman-Catholic style of art, and presented in small portable boxes.

A huge part of Ayacucho’s culture is based in its traditional activities, previously the Carnivals and the Holy Week have been declared as “National Cultural Heritage in Perú” in 2003 and 2018 respectively. This sanctuary deserves to be explored with enthusiasm and a willingness to discover the pleasure of Ayacuchan music and culture.

Why is it Called Huamanga?

Guaman qaqa is a Quechua word that refers to the place where the Spanish arrived. According to local people, during one of his trips through the zone, Viracocha Inca (one of the leaders of the Inca Empire) decided to have a break from traveling when a falcon rested on his shoulder. Legend says he told the animal: “Guaman Ka” meaning “eat, falcon”.

The name Huamanga was changed to Ayacucho by decree of the liberator, Simón Bolívar, on the 15th of February 1825. This was done as a homage to the victory of the army in the Ayacucho Battle.

Ayacucho is a combination of two Quechua words: “aya” meaning soul and “k’uchu” meaning dwelling. In this sense, Ayacucho means “souls’ dwelling”. This is referring to a place where many human bones were found from the different battles that took place in the area. 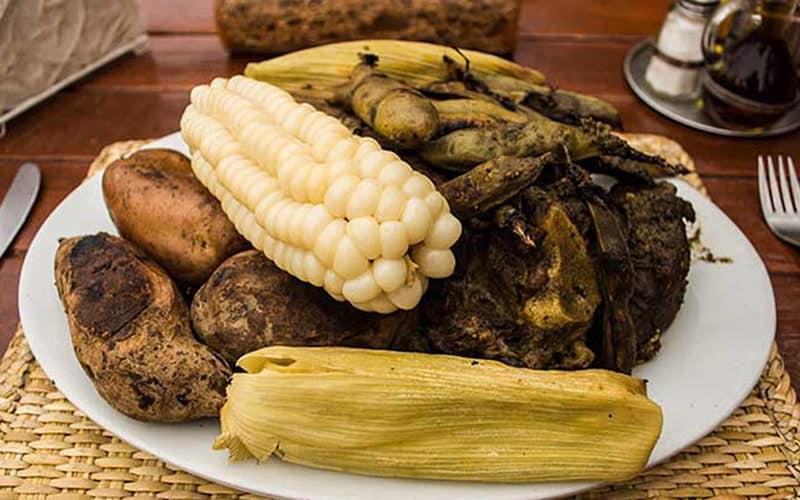 Things to See in Ayacucho 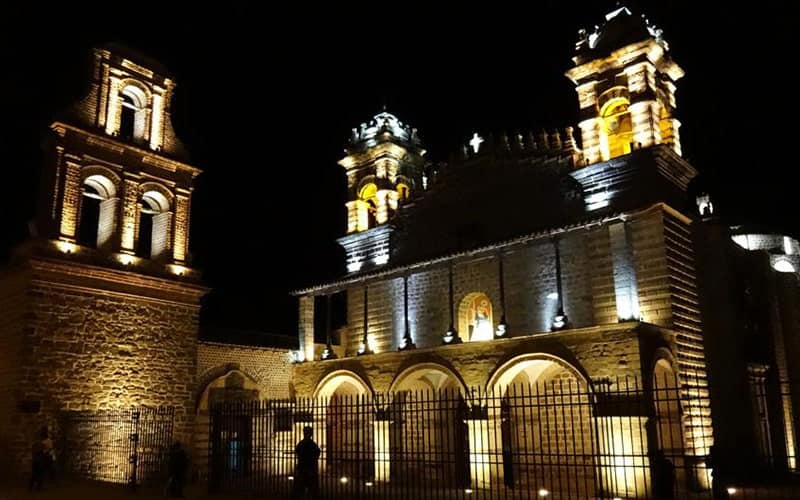 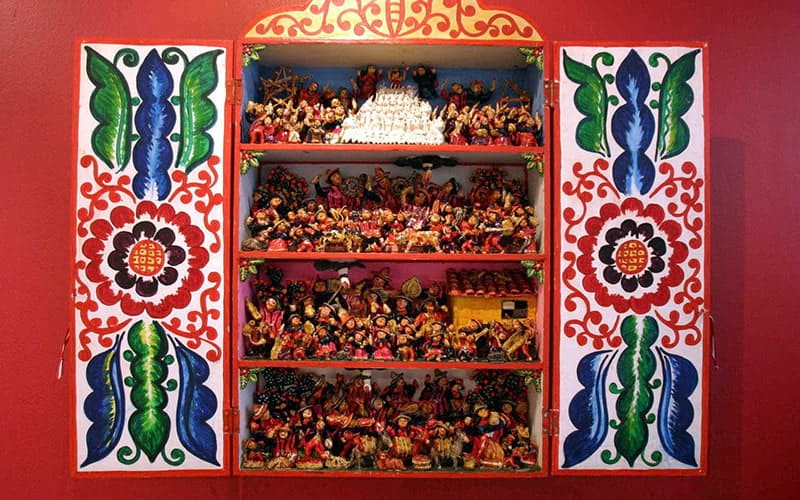 Ayacucho is also known as “Peru’s Capital of Folk Arts and Handicrafts”, and much of the artisan work produced by Ayacuchanos is exported to Europe, North America and Asia.

Retablos are the most famous artisan offering- they were originally made from portable altars boxes, but have developed into outrageous collections of tiny hand-carved wooden or clay figurines and other beautiful objects, crammed into several layers inside the box. These are beautiful expressions of the Ayacucho people and culture, they all have plenty of colors and are sometimes very funny. If you’re looking to see the master craftsmen at work, it’s highly recommended to visit the Shosaku Nagase Handicraft Market, located just 5 blocks from the central plaza. The best workshops are in the barrios of Santa Ana, Puca Cruz, Belén and La Libertad.

Originally celebrated in Spain, this is the most famous religious feast in Peru, and it represents sacrifice and death of Jesus in the cavalry. All the citizens participate in this celebration, and people from surrounding cities arrive in caravans to Ayacucho, ready to take part in the religious devotion. This is one of the many religious festivals in Peru.

The celebration begins on Sunday, or “Domingo de Ramos” (Palms) and ends the next Sunday with the “Domingo de Pascua” (Easter). One of the most important events during Holy Week is the processions and religious manifestations that are accompanied by folkloric dances. Alongside these celebrations, artisan and cattle fairs take place throughout the whole week.

Very early in the morning on the first Sunday of the festival donkeys and llamas are adorned with herbs from the local area before entering the city. This is representative of the triumphant entrance of Jesus to Jerusalem. On the Thursday of the holy week, it is traditional for citizens to visit all of the 33 churches in the city. Saturday is the day in which “morochucos” (cowboys of the Andes), ride their horses up the Acuchimay Mountain alongside the people from Ayacucho.

On the last Sunday of the festival, all of the churches in Ayacucho ring their bells, waking up the citizens. It is then traditional to go to the Cathedral, carrying a very big depiction of Jesus brought back to life. This brings a close to this special Holy Week. 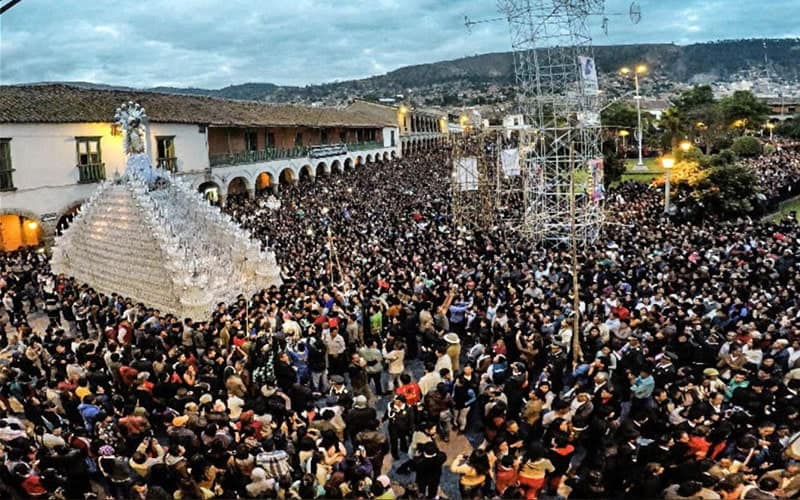 How to Get Ayacucho

Regular flights leave from Lima to Ayacucho and take 45 minutes.

There is plenty of tradition, folklore, and handicrafts to soak up and enjoy here. Ayacucho is a must-see destination during your visit to Peru. Enjoy the city, people, the food and handicrafts that make Ayacucho a spot that you can not miss on your Peruvian adventure! What are you waiting for? Plan your trip!