Hard Cash and Cockfighting in Peru | How to Peru

Hard Cash and Cockfighting in Peru 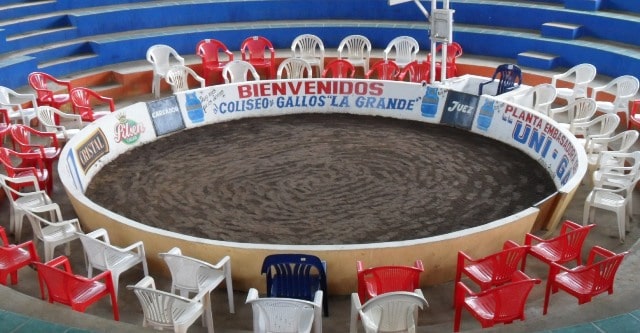 The Coliseo de Gallos “La Grande” sits on the outskirts of Tarapoto. It’s a small but well-conceived cockfighting arena much like others found across Peru. The location is neither dark nor dingy, and there is nothing illegal or clandestine about the proceedings. The white walls of the arena floor are daubed with sponsorship: Universal Gas, Cristal, Pilsen Callao. Like bullfighting, this traditional sport has a certain prestige. There is also money involved: a significant amount of money.

Careadores and the Gallos de Pelea

I arrived early for my first and only visit to the coliseo. I watched the owners, the careadores, arrive at the arena with their gallos de pelea safely housed in purpose-built carry cases. Some birds were placed in the arena’s many wood and concrete cages, each cell numbered in efficient fashion — an efficiency that is rare in Peru, but more than evident at the coliseo.

Upon arrival, fight officials weighed each bird. This would determine the match-ups in the arena, with birds of equal weight pitted against each other. As they hung suspended in the weighing saddle, the birds looked little different from their marketplace counterparts — with the exception of their partially naked backs, the feathers plucked to keep the fighters cool in the heat of battle.

The crowds grew slowly, with groups of men passing beer from hand to hand in typical Peruvian fashion. Families sat digging into large plates of food from the arena’s basic restaurant as their kids scurried around. It was a male-dominated event, but women and children were certainly welcome.

The Tools of the Trade

Near the weigh-in area, two salesmen set up stands upon which they unfurled the tools of the trade. The cockfighting equipment on sale consisted of practice gear, primarily sparring muffs, and competition-grade kit, mostly cockspurs.

Cockspurs are slightly curved, viciously sharp spikes that are strapped to the cock’s legs (with the spike pointing backwards, replacing the bird’s natural spur). There were two types available: cheaper plastic spikes and expensive spikes made of fishbone. If an owner wants the best for his fighter, he has to spend a hefty S/.400 (US$145) for a pair of two-inch fishbone spikes.

With the gallos de pelea weighed and the sand freshly swept, the owners gathered in the arena, their birds tethered and strutting at their feet. The announcer called out the names of all involved. The spectators, still small in number compared to later rounds, took to their seats in the bleachers surrounding the circular pit.

There was a quiet buzz of anticipation as all but two of the owners left the sand. The two remaining careadores looked focused, perhaps a little nervous, as they held their gallos gently between two hands, inspecting the spurs for the final time. The judge motioned both careadores to the center of the arena, where they held their prizefighters in position. At the drop of a hand, both cocks were released, each one immediately, instinctually, rushing towards its opponent.

A flurry of kicks and powerful pecks soon had both birds entangled, their spurs locking them together, snagged in wings and chest feathers. Both lay motionless on the ground until their owners freed them, placing them back into attack position. Again they met, one cock taking the advantage and driving its rival to the arena’s edge, forcing it against the white wall with a series of attacking leaps, jumping up to bring down the piercing cockspurs.

Both gallos limited themselves to short offensive bursts as they began to tire in the heat. The noise of the crowd ebbed and flowed with the action; quiet, intense muttering accompanied the fight as the birds circled, then loud cries of support and freshly placed bets as one gallo launched an attack. “Cinco soles, El Negro!” they shouted as the black-feathered fighter took control over Pelo Rojo.

The red-feathered Pelo Rojo had obviously tired to a point of defenselessness as the fight progressed into its sixth or seventh minute. Thankfully, his owner pulled him from the fight, conceding victory. 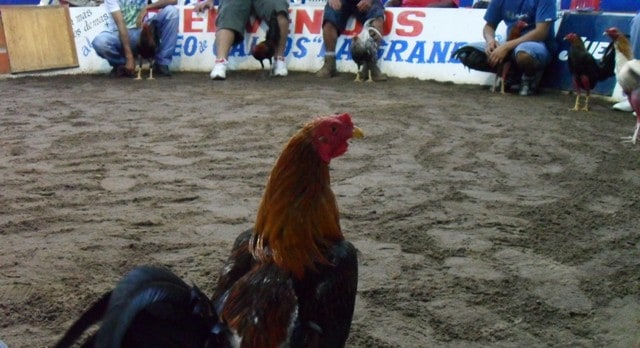 The second fight continued along a similar path to the first, a lengthy contest that ended in one bird being pulled from the fight, tired but seemingly unhurt. The third match-up, however, was a far more stifling display of small-scale brutality.

The crowd had swelled by this stage, as if the lightweights were done and the heavyweights were about to fight. Two new careadores entered the arena carrying gallos that looked noticeably heavier. As the fight began, this extra weight and power proved devastating. The bets were flying as the two cocks pummeled each other with beak and spur, audibly dislodging feathers.

I was regretting my choice of a ringside seat as the two birds fought just inches from me, but I wasn’t there to distance myself from the spectacle.

It ended with a spur strike. The blow incapacitated one of the gallos, its body suddenly falling limp on the sand before a short bout of twitching, an ugly sight that sent a cold flush through my body.

The careador lifted his bird from the sand and carried it out of the arena pit, up the stairs through the spectators, cash already passing from hand to hand as bets were fulfilled. The bird survived — or so I was later told — now destined for a life of procreation. That’s a good way for any fighter to end up, but I still doubt the truth of the tale.

An Early Exit from the Cockfighting Arena

Either way, the third fight was enough for me. It was 7 pm and dark outside, but the lights above the arena would shine upon many more fights that night, none of which I wanted to see.

A man handed me a bright blue leaflet as I walked out of the coliseo. The leaflet advertised a major cockfight soon to take place in Chiclayo. The overall champion would receive a S/.2,000 prize, while S/.5,000 was on offer for all gallos that could “kill or incapacitate their opponents within 40 seconds.”

There’s money to be made on the coliseo sand, that’s for sure, but it takes a certain type of person to enjoy the sights and sounds beneath the lights of Peru’s cockfighting arenas.

7 comments for “Hard Cash and Cockfighting in Peru”