What’s the Difference Between a Llama and an Alpaca? | How to Peru

What’s the Difference Between a Llama and an Alpaca? 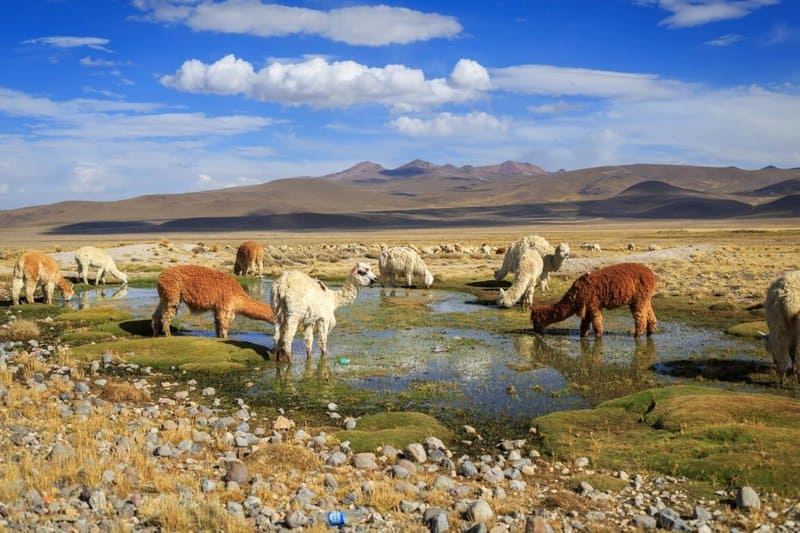 If you’ve ever seen a postcard for Peru, chances are it featured one of two things (or maybe both): 1. the majestic ruins of Machu Picchu, and 2. a llama or alpaca, grazing on a hillside. But what’s the difference between a llama and an alpaca? How can you tell these two majestic creatures apart?

Most people have heard of the alpaca and know that it is closely related to the llama, but have you heard of the vicuña or the guanaco, the wild ancestors of the domesticated llama and alpaca? It is, in fact, a vicuña and not a llama which is emblazoned on the national coat of arms and national flag of Peru. 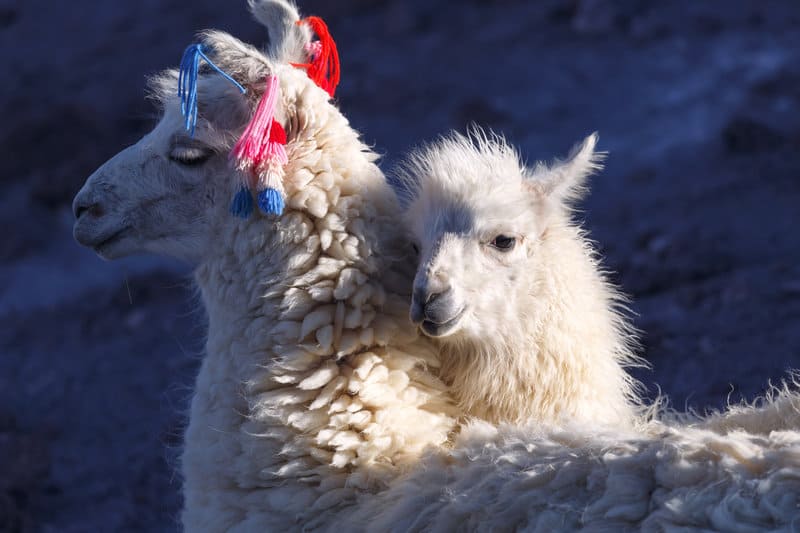 This blog is here to help you get to know the “lamoid” animals (llamas and animals like them, in other words). You’ll very quickly learn to tell the difference between a llama and an alpaca.

All in the Family

Llamas, alpacas, vicuñas and guanacos are all related to the camels of north Africa, the middle east and central Asia, together forming one family of animals called camelidae. All members of this family share one common evolutionary ancestor. Llamas and their evolutionary relatives are all strictly herbivorous, dining on a diet of various grasses. Members of this family do not have hooves, but rather two-toed feet with toenails and foot pads. In the case of the South American species, the pads on the toes can be moved in order to maintain grip on rocky terrain. Llamas and their relatives are very well-adapted to their local environment!

It’s very difficult for the layperson to tell the difference between these two animals. There are, however, a few telltale signs that you can look for that will help you distinguish between the two. 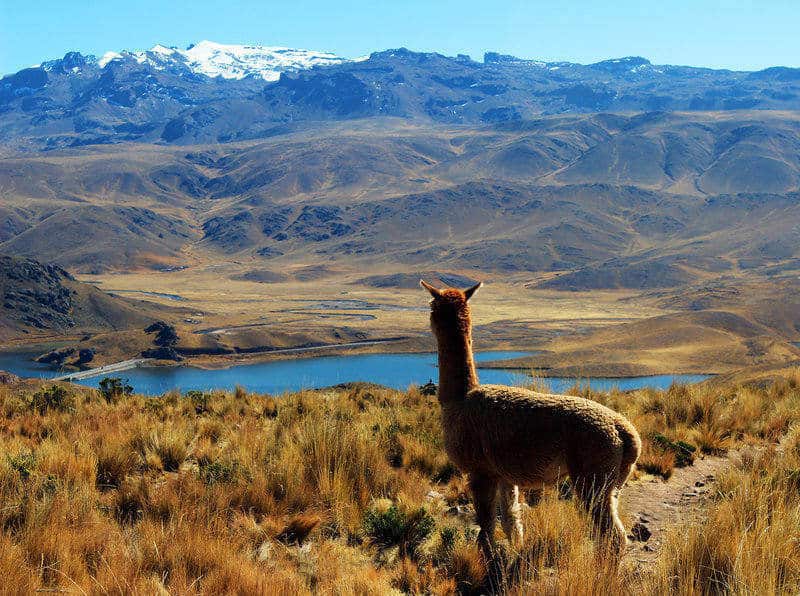 Llamas are the bigger animal by far, at about double the size of an alpaca. Llamas generally weigh from 90 to 158 kg compared to the alpaca’s 45 to 68 kg. Llamas are also taller, measuring over 110 cm, while alpacas are only about 90 cm tall at their tallest.

Llamas have long, curved ears similar to the shape of a banana, while alpacas tend to have shorter and straighter ears.

Llamas typically have a coarse outer coat (with a soft under coat), compared to alpacas whose hair is fine and soft to the touch.

Alpacas have a longer face compared to the llama’s blunt, “smooshed” face. Alpacas also tend to have a lot more hair on their head and face.

In addition to these physical characteristics, llamas and alpacas also tend to behave differently. Alpacas are herd animals known for having a nervous demeanor, whereas llamas tend to be more independent and will aggressively defend themselves–they actually often serve as guards for other animals, including alpacas! Both species are known to spit when they feel threatened, but llamas are more prone to this behavior than alpacas are.

The Vicuña and the Guanaco

There are two wild camelid species native to South America, the vicuña and the guanaco. It is believed that the llama and the alpaca are the direct result of attempts by the Incas to domesticate the guanaco and the vicuña, respectively. These two species both roam wild throughout the Andes region. Here’s a little more about each: 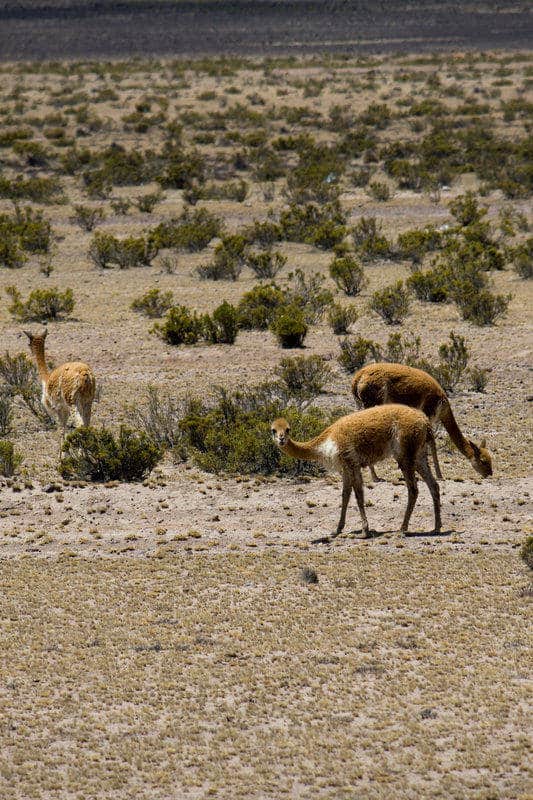 Vicuñas are slender, graceful animals often compared to deer. They weigh no more than 68 kg and measure only 75 to 85 cm at the shoulder. They are known for their super-soft fleece, which yields only about one pound of wool per year, making it extremely rare and valuable. This animal is currently endangered due to overhunting and it is now forbidden to hunt them (however, a certain number per year are allowed to be sheared as long as they are released afterwards).

Weighing in at around 200 lbs, the guanaco is considerably larger than the vicuña. Much like its domesticated cousin, the llama, it also is known for its coarse outer coat and soft under coat. Guanacos can also be identified by their distinct coloring, consisting of a brown back, a white underbelly and a grey face.  The guanaco is also a protected species like the vicuña, but since its coarse fur is less useful for making textiles, it has not been hunted as frequently.

You can find products made with fiber from all four of these camelid species in Peru, but you should know a little bit about the qualities of each before you buy.

The main thing to keep in mind is that the fiber of the alpaca and the vicuña are softer and thus considered better quality. Alpacas are bred specifically for this purpose, so products made from alpaca fleece are very common. You will also see products marketed as using “baby alpaca.” This refers to fiber taken from the underside of the neck and belly at the alpaca’s first shearing, when it is less than a year old and the fleece is the finest and softest. Products made from the fiber of vicuñas, which are only found in the wild, are much rarer. This is considered the finest fabric in the world. In fact, during ancient times, vicuña fleece was exclusively worn by Inca royalty!

Products made with llama fiber are also fairly common, but expect a fabric that is much coarser and scratchier than the delicate alpaca fleece. Guanaco fiber is considered slightly superior to llama fiber because it is easier to process. However, guanaco products are somewhat rare, as they are only found in the wild and their fabric is not especially desired. 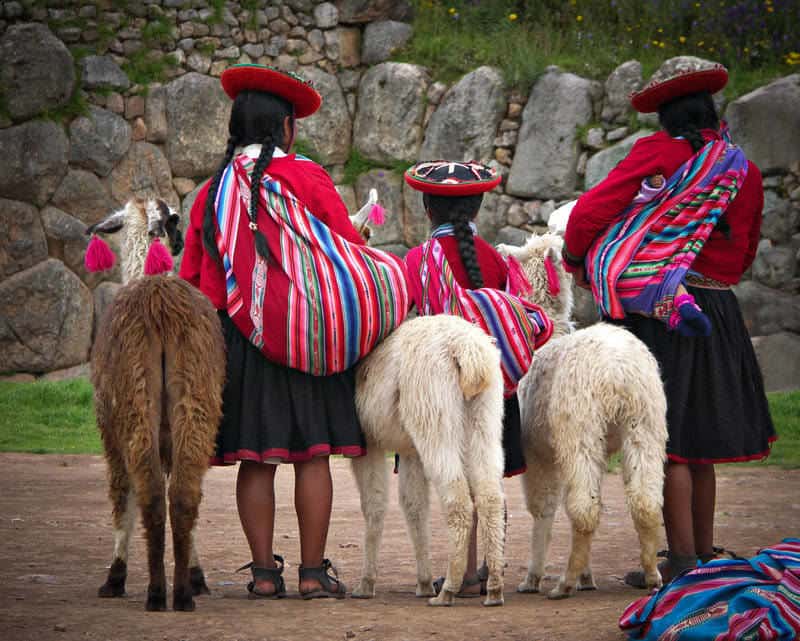 For the best combination of quality and price, we recommend buying products made from alpaca fiber. It is allergen-free unlike sheep’s wool, and is known to be softer, lighter and stronger than cashmere.

There are two subspecies of alpaca, which each have distinct types of hair. The huacaya alpaca has short, fluffy and sheeplike fibers, while the suri alpaca has a longer coat which in turn produces longer fibers. The suri variety is less common, so products using this fiber will be a little more expensive.

Popular products made from South American camelid fiber include:

You will be able to find products from llama or alpaca at just about any artisan market in Peru or Bolivia. Of special note are the market in Pisac (about one hour from Cusco) and the artisan markets on Av. Petit Thouars in the Miraflores district of Lima. Both of these markets have massive amounts of authentic products and you should be able to find exactly what you want.

Now that you know a little more about these interesting native Andean animals, you can impress the locals or friends with your knowledge, you’ll know to keep a look out for the wild species, and you’ll be a much more informed customer when you’re shopping for that perfect sweater or hat to take home as a souvenir!