Sipán and the Tombs of the Moche Elite | How to Peru

Sipán and the Tombs of the Moche Elite 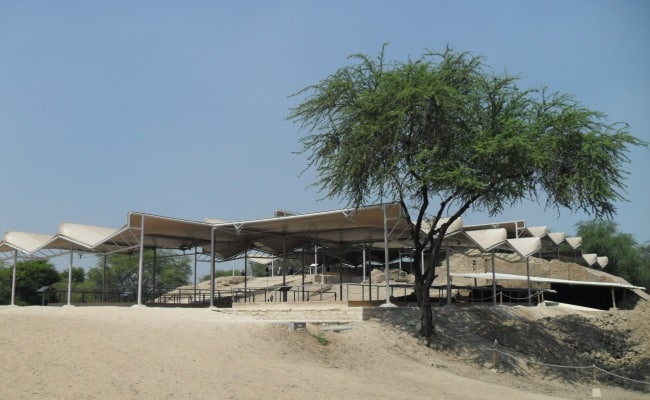 The Moche lords of Sipán had slept undisturbed since AD 250, more than 1,000 years before the rise of the Inca Empire. Buried deep within the now well-weathered stepped pyramid and platforms of the Huaca Rajada, these nobles and priests remained untouched as the world went on without them.

They went unnoticed by the Spanish conquistadors, men whose rampant gold lust had seen many tombs upturned into the melting pot. And they were saved just in time from the clutches of local huaqueros, tomb raiders who in this case turned against each other, ultimately revealing the riches of Huaca Rajada to local archaeologists and to the world.

When police from the nearby city of Chiclayo arrested and interrogated one huaquero, their questioning led them to a gang digging in a desert site near the small town of Sipán in the Lambayeque Valley. Shots were fired, a looter died, and gold was recovered.

The police called in Walter Alva, a 37-year-old Peruvian archaeologist and director of Lambayeque’s Brüning Museum. It immediately became apparent that this was no ordinary find — and this was more than just a stash of gold.

The police revealed a golden face with turquoise eyes, a gold feline head with teeth made from shell, and two oversized and beautifully crafted peanuts made from pure gold.

Alva’s great project had just begun, and the world was about to be shown riches to rival those of King Tut’s tomb. 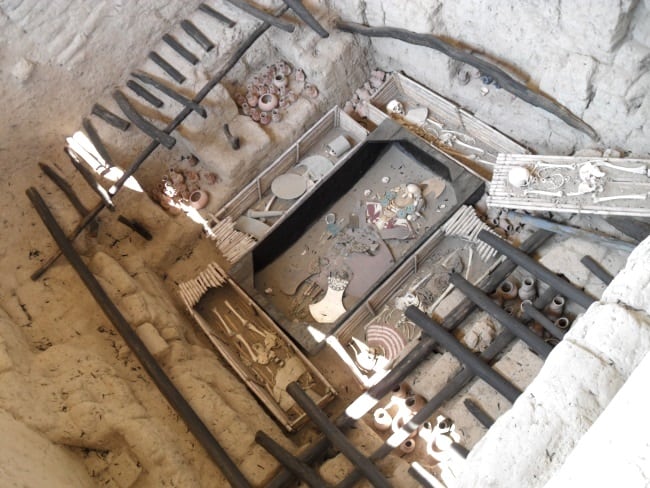 In 1987, Walter Alva and Luis Chero began their careful excavation of Huaca Rajada, a site that looks fairly dull on first viewing, a trait shared by many of the weathered adobe brick archaeological sites along the coast of Peru.

There was nothing dull, however, about what lay below the surface.

The archaeologists began their excavation near the site where the looters had already started to dig. They were soon encountering distinct layers, at first a collection of more than 1,000 Moche pots, then the skeleton of a man in an uncommon seated position, his feet missing.

Only when Alva and Chero went deeper did the seated skeleton’s purpose become clear: he was the guardian of a tomb of immense importance, his feet removed to ensure that he could never abandon his sacred post.

The archaeologists had found the tomb of a Moche lord, an elite member of society and perhaps the ruler of the entire Lambayeque Valley. His costumed remains lay in a wooden sarcophagus, both adorned with lavish gold and silver pieces. Shields and ornaments were decorated with shell, bone and feathers. On his feet were copper sandals, his body covered with ornately crafted blankets.

This figure would later be known as El Señor de Sipán, the Lord of Sipán. Visitors can today see a recreation of his burial chamber within the original tomb at Huaca Rajada (see image above), including the six other skeletons found alongside him: two warriors, three women and one child. 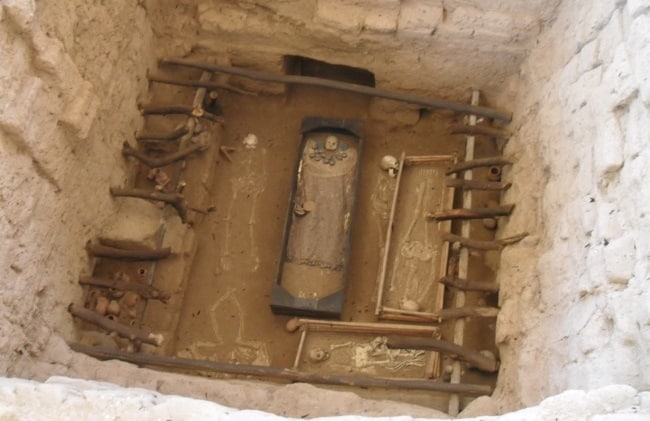 A Political Center of Sacred Tombs

The Señor de Sipán was not the only member of the Moche elite buried at Huaca Rajada, a site now believed to have served as both the political and sacred center of the region (religion and politics going hand in hand in Moche society).

Alva and Chero went on to discover many more burial chambers. Tomb 2 was uncovered in 1988, revealing a contemporary of the Señor de Sipán (c. AD 250). This tomb was not as lavish as Tomb 1, the archaeologists concluding that the skeleton was that of a high-ranking Moche priest.

Tomb 3, meanwhile, rivaled that of El Señor himself, but was from a significantly earlier period. Located beneath an impressive 16 layers of ornaments and other offerings, the principal skeleton was covered in gold armor and adorned with some of the site’s finest and most intricate gold and copper artifacts. DNA tests revealed that the skeleton was connected to the same royal bloodline as the later Señor de Sipán, giving rise to the eventual name of this older Moche ruler, the Viejo Señor de Sipán (the Old Lord of Sipán).

By 2007, 14 elite Moche burials had been found at the site. Excavations continue, with more tombs almost certainly waiting to be found at Huaca Rajada.

3 comments for “Sipán and the Tombs of the Moche Elite”