The Tawantinsuyu and the Frontiers of the Inca Empire

The Incas divided their empire into four parts, or suyus, each extending from the capital city of Cusco, the so-called “Navel of the Earth.” Collectively, the Incas referred to their empire as the Tawantinsuyu, which can be roughly translated as “Land of the Four Quarters” or “The Four Parts Together.” These four regions were known as Chinchaysuyu, Antisuyu, Cuntisuyu and Collasuyu. 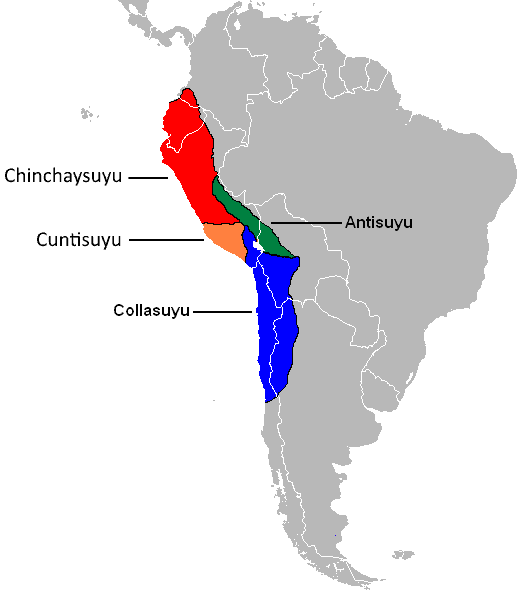 For the Incas, politically at least, the four suyus of the empire extended from Cusco until the edge of the civilized and habitable physical realm. Rumors of other great civilizations may have existed, but the frontiers were largely fluid with no known major rivals hemming in the expansive and ever expanding empire.

At the height of the Inca Empire (see Inca timeline), the Tawantinsuyu covered an area of more than 770,000 square miles (about two million square kilometers).


View More
Quick Tip:  If travelling to or from Lima Airport, it is strongly recommended to use the luxury Airport Express Lima  bus to get to or from your hotel. Safer and cheaper than a taxi with no baggage limit as well as Free Wi-Fi and USB chargers onboard, it is ideal for travellers.

The northwestern suyu, Chinchaysuyu, took its name from the province, or ethnic region, of Chincha.  Chinchaysuyu was the second largest of the four quarters, encompassing both the Peruvian coastal strip and Andean highlands north of Cusco, as well as much of modern-day Ecuador and a small segment of what is now southern Colombia. The Qhapaq Ñan, or Great Inca Road, ran the length of Chinchaysuyu, connecting the Inca capital of Cusco with Quito (the capital of modern-day Ecuador) in the far north.

According to the Encyclopedia of Prehistory (Volume 7: South America), the ecological and ethnic diversity of the Chinchaysuyu region “engendered a very heterogeneous approach to imperial Inca rule.”

The region contained distinctly different and geographically defined cultures from the coastal lowlands, the Andean highlands and the tropical eastern foothills of the Andean range. In order to maintain greater control and stability in the region, the Incas allowed these different ethnic groups to retain many of their own beliefs and traditions.

Antisuyu spread out to the north and northeast of Cusco. The suyu took its name from the Anti region and the Anti ethnic group that inhabited it (Anti, when Hispanicized, became Andes).

The vast Peruvian Amazon served to restrict the eastern expansion of the Antisuyu region. The Incas made few attempts to penetrate beyond the ceja de selva, the “brow of the jungle” that lay on the eastern foothills of the Andean range. They saw the deep jungle as a savage land populated by equally savage people.

But the tropical forests east of the Andes did provide a number of important products such as hardwoods (used for Inca weapons), feathers, wax and honey. The jungle was also an important source of medicinal herbs and hallucinogens (used in religious ceremonies and rites of passage).

Warriors, traders and explorers ventured east into the dense lowland jungles, but due to the problematic geography, Inca occupation of the region was not a priority. As such, Antisuyu remained a comparatively small region with a distinct lack of infrastructure (in terms of roads and major settlements).

Cuntisuyu (or Contisuyu, Kuntisuyu) was the smallest suyu in the Tawantinsuyu. It extended southwest from Cusco until it reached the Pacific Ocean. Cunti was a province within the suyu, after which the region was named.

Geographically, Cuntisuyu was dominated by the dry foothills of the western highlands and the arid desert plains that stretched from modern-day Arequipa to the southern coast of Peru. Architecturally, the Incas adapted their construction style in the region to reflect that of local cultures more accustomed to the hot and dry climate. As such, fine Inca masonry as found in the highlands often gave way to adobe bricks along the coast of the Cuntisuyu region.

Collasuyu (or Kollasuyu, Qullasuyu) was the largest of the four quarters. Named after the Colla (Qolla) peoples located on the northern shores of Lake Titicaca, the suyu encompassed Peru’s southern highlands and the Bolivian Altiplano (Andean Plateau) before pushing all the way south into central Chile and a large strip of northwestern Argentina.

The Collasuyu covered much of the Aymara and Uru territories. It also contained a number of major holy shrines, most notably those found in the Titicaca region. As such, Collasuyu held a special place within the Inca Empire, being both an important spiritual and political region of the Tawantinsuyu.

If this has peaked your interest, and you intend to make plans for a trip to these epic historical four regions we suggest you check out FindLocalTrips.com a tour comparison website with heaps of info and all the different options for taking that trip of a lifetime.