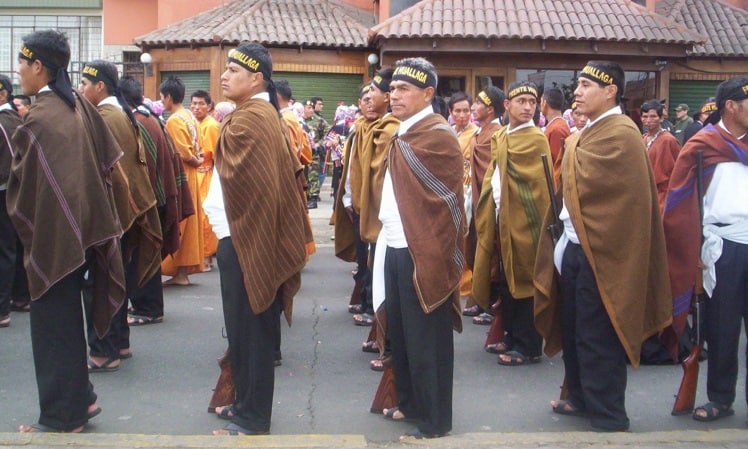 Ronderos are members of the Ronda Campesina, an antiquated form of rural, community-based security — and sometimes justice — in Peru. If you don’t know who or what they are, then meeting these guys out on a deserted road in the middle of nowhere can be unsettling.

They are neither Peruvian police nor military, but they are armed and have all the authority needed to stop and search vehicles while on highway patrols – they also appreciate a tip. If you don’t know what’s going on, you couldn’t be blamed for thinking that you are being held up by armed bandits demanding cash.

Who Are the Ronderos?

The Rondas Campesinas (“rural” or “peasant” patrols) were formed in the 1970s, at which point they existed primarily in the northern highlands of Peru. The role and range of the ronderos expanded in the ‘80s as part of the fight against terrorism. They can now be found throughout Peru, but their influence varies from one region to the next.

As an organization, the Rondas Campesinas are legally recognized by Law No. 27908 “as an autonomous and democratic community organization that can establish dialogue with the State, support the military in the judicial functions of the rural and indigenous communities, assist in conflict resolution and perform functions of extrajudicial conciliation under the Constitution and the Law.”

Things can get a little bit hazy after the legal speak. Ronderos have been known to deal out incredibly rough justice (community justice), beating up, setting fire to or killing the criminals that they apprehend. These may be isolated incidents, but they still happen. Some ronderos also have a reputation for working on both sides of the law, patrolling and preying upon the roads.

In an article republished on Alertanet.com (in Spanish), Raquel Yrigoyen Fajardo writes: “The problems with the Rondas Campesinas usually start when you exit the village [or community] level. In general, judges and prosecutors believe that the ronderos are acting outside the legal framework and are not competent to administer justice, to stop thieves [abigeos: literally rustlers or cattle thieves] or apply sanctions.” 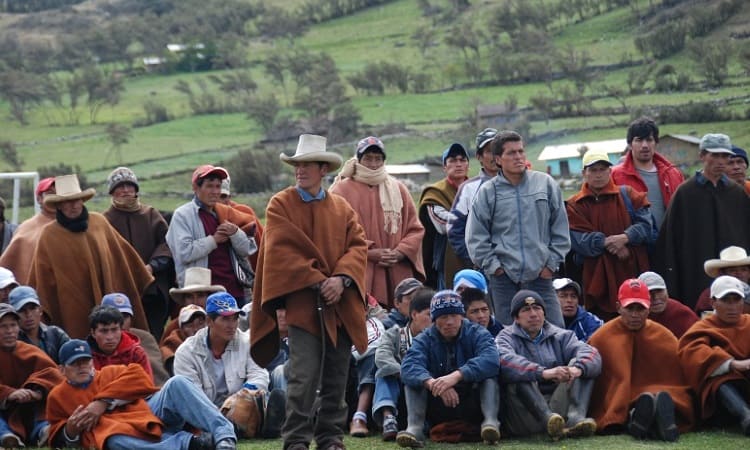 Members of the ronda campesina in Cajamarca, Peru (photo from www.regioncajamarca.gob.pe)

Ronderos and Travelers in Peru

You are most likely to deal with ronderos face-to-face when you head out along some of Peru’s less reputable roads. The Tingo Maria to Tarapoto road, for example, and the Tingo Maria to Pucallpa road are both patrolled by ronderos (due to an often limited police presence).

While highway police will want to see your passport, the ronderos tend to just snoop around a little before collecting their “service payment.” A 1 sol tip seems to do the trick. If you are wondering what exactly you are paying for, rest assured that the presence of these ronderos is a far better option than getting stopped by bandits.

In general, the ronderos are OK. Getting stopped by a random guy with a gun is an unsettling experience, but if you know who you are dealing with (a rondero rather than an actual highway bandit) it’s all a lot less stressful. Sometimes they are a bit pushy, irritating and rude, but most of the time they just collect their tips with barely a word spoken.

Sometimes, of course, they are operating at the very fringes — if not outside — of the law. 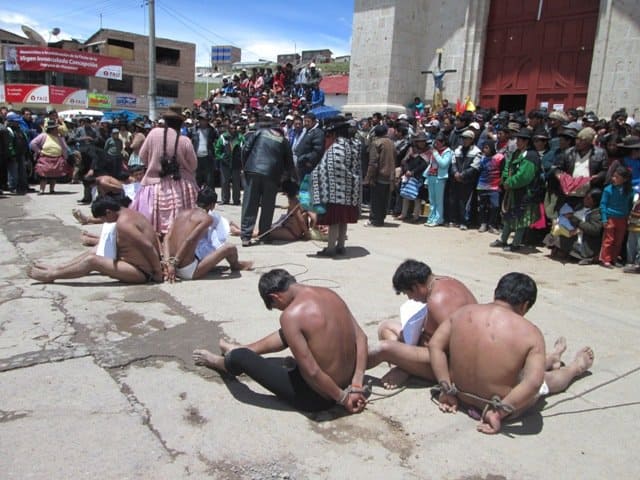 The ronda campesina publicly punishes a family in Chaquilbamba, La Libertad, following a land dispute. The family complained about their treatment at the hands of the ronderos (photo from RPP Noticias)

Have You Come Across Ronderos While Traveling in Peru?

If you have anything to add about the ronderos, positive or negative, please leave a comment below. I’ve never had any problems with them myself, so any further Peru travel experiences or points of view would be much appreciated. Thanks.