Parque Kennedy in Miraflores, Lima | How to Peru

Parque Kennedy sits in the heart of Lima’s Miraflores district, a popular hangout for both budget backpackers and well-heeled tourists. The park, along with the coastal path a few blocks to the southwest, is a focal point within the upscale district. It’s not exactly an oasis of calm — Lima’s seemingly ceaseless traffic still slides by on all sides — but it does offer a tranquil respite from the bustling streets. 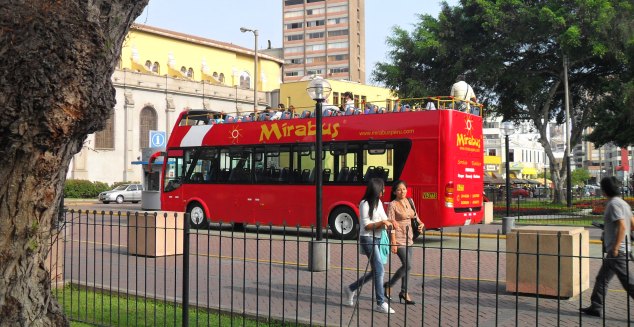 The roughly triangular-shaped park is wedged between Avenida Diagonal to the west and Larco to the east, two major thoroughfares that join at the park’s northern tip (at the ovalo, or roundabout, that connects with Av. José Pardo and the northbound Av. Arequipa). The park itself is divided in two by a pedestrian avenue, often used as a temporary venue for various outdoor exhibitions (the red Mirabus tour bus also lurks around here).


In the southern half of the park, you’ll find the mercado de pulgas, a small flea market that sells odds-and-ends ranging from traditional textiles and classic Andean clothing to paintings and jewelry. If you’ve already seen enough of all that, look for a stall selling completely random but oddly intriguing antiquities (exact age and authenticity open to debate). Or, of course, there are always knitted finger puppets. The mercado de pulgas seems to open most days, mainly in the evenings. 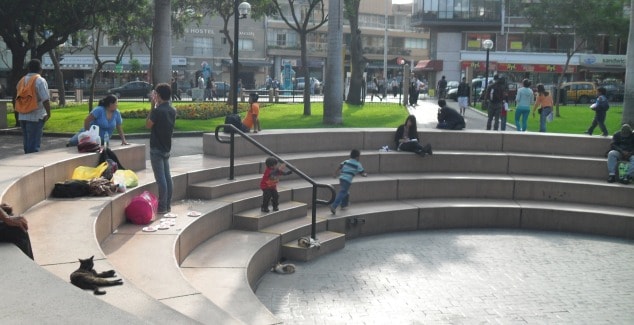 Head slightly further up the park and you’ll find a small amphitheatre (the Anfiteatro Chabuca Granda, named after a Peruvian singer and composer of the same name). Here, normally after dark, you can sometimes see free performances, including traditional Peruvian dances, musica criolla, choirs and poetry readings.

One of the most notable buildings on the edge of the park is the Iglesia de la Virgen Milagrosa (or Iglesia Medalla Milagrosa), a church built in 1939. The architect behind the project was Ricardo de Jaxa Malachowski, a Peruvian of Polish and Slovak origin. Malachowski was also a principal architect of the Palacio de Gobierno (Government Palace) on Lima’s Plaza de Armas (Plaza Mayor). 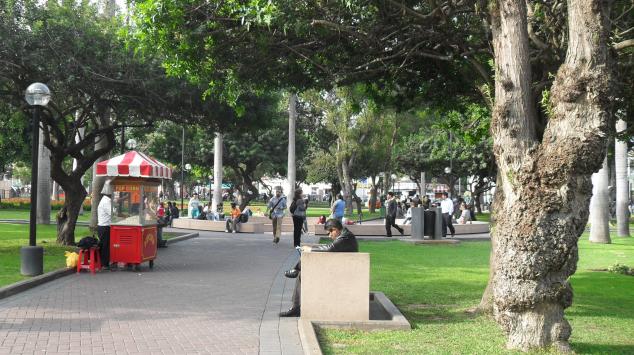 Go for a stroll, read a paper, buy some popcorn… it’s all good in Parque Kennedy (photo © Tony Dunnell)

If you’re struck by hunger while strolling through Parque Kennedy, you can buy a sandwich or something sweet from one of the stands inside the park. Alternatively, you’ll find some good sandwich bars along the Diagonal (including Miguel’s, Sandwich.com and La Lucha). The Diagonal is also home to the popular Haiti cafe-restaurant; head further up towards the ovalo and you’ll find the El Pacífico cinema (and MacDonald’s, if you are feeling horrifically unadventurous…).

On the other side of the park, along Larco, there are two pricey restaurants, Café de la Paz and El Parquetito. You’ll also find a good Peruvian chicken restaurant called Kiriko. If you are feeling chronically mundane, you’ll be happy to find a Burger King, a KFC and a Pizza Hut. Jackpot!