A Classic Case of Mass Hysteria in Tarapoto, Peru | How to Peru

A Classic Case of Mass Hysteria in Tarapoto, Peru

In May 2016, local media in Tarapoto, San Martin, began reporting on a strange incident unfolding at an otherwise unnoteworthy school named Colegio Elsa Perea Flores. Since April 29, at least 75 students and two teachers have fainted at the school, with some students falling into uncontrollable spells of crying, dizziness and occasional convulsions.

Henry Narro Garcia, director of the San Martin Health Network, quickly stated that the incident was a case of mass hysteria. Despite this, concerned parents still insisted that a priest perform a ceremony at the school, fearing that the children were in the grip of demonic possession.

Local and international media also ran with the darker possibilities of the story.

Popular UK tabloid The Daily Mail, not known for its insightful reportage, makes no mention of mass hysteria, but does note that the school was “reportedly built on a Mafia graveyard” and that the schoolchildren had “suffered seizures and described visions of a man in black trying to kill them in what locals say was a mass case of ‘demonic possession’.”

This “man in black” element to the story seems to have emerged from nowhere – but its similarity to a mass hysteria outbreak in Malaysia in April 2016, in which a “black figure” was spotted lurking in the school, hints at a possible mixing of stories in the international press (or some kind of copycatting taking place at the school?). 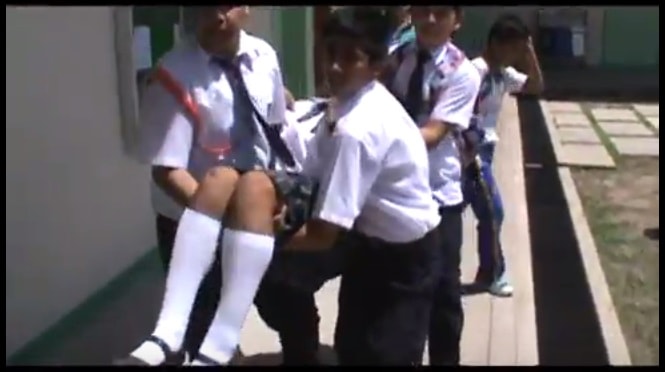 A schoolgirl is carried by her classmates at Colegio Elsa Perea Flores in Tarapoto, Peru (screenshot from TeleNoticias report)

View More
Quick Tip:  If travelling to or from Lima Airport, it is strongly recommended to use the luxury Airport Express Lima  bus to get to or from your hotel. Safer and cheaper than a taxi with no baggage limit as well as Free Wi-Fi and USB chargers onboard, it is ideal for travellers.

Mass hysteria is not uncommon, with notable cases dating back to the Middle Ages. Perhaps the most famous case is that of the Salem witch trials. Throughout the last century, cases of mass hysteria have been recorded with surprising regularity. Of course, some of these cases are disputed; some people prefer to blame actual demons, while anti-vaxxers often use a case of school-based mass hysteria to accuse the latest childhood vaccine.

So what are the symptoms and characteristics of mass hysteria, more specifically known as mass psychogenic illnesses (MPI), and how do they relate to the case in Tarapoto, Peru?

In “A Case of Mass Hysteria or Toxic Fumes? Considerations for University Administrators”, Ruth C. Engs et al highlight some of the major characteristics common to psychogenic illness, first noting that “There is a remarkable similarity between the symptomology of the mass psychogenic illnesses no matter what the triggering event.” Most of these symptoms can be seen in the Tarapoto case:

All things considered, Henry Narro Garcia seems to have made exactly the right call when he stated that mass hysteria was to blame for the strange events at Colegio Elsa Perea Flores. I imagine his opinion was received with a fair amount of skepticism and opposition; from my experience talking about this case with people here in Tarapoto, the very notion of mass hysteria is treated with suspicion and doubt.

And while a gas leak or “something in the water” might seem far more reasonable, there’s plenty of evidence to support mass hysteria. And it has nothing to do with gods or demons, so please leave your priests at home.

3 comments for “A Classic Case of Mass Hysteria in Tarapoto, Peru”