Each year on June 24, the Andean city of Cusco celebrates the biggest event of the calendar year with the grand re-enactment of the Inca festival Inti Raymi. According to centuries-old chronicles, such as those by Garcilaso de la Vega, Inca Pachacutec created Inti Raymi as a tribute to the venerated Sun God, Inti. Today, the annual festival draws tens-of-thousands of international visitors, and is a colourful spectacle of processions, dancing and spiritual worship set in awe-inspiring Inca surroundings… 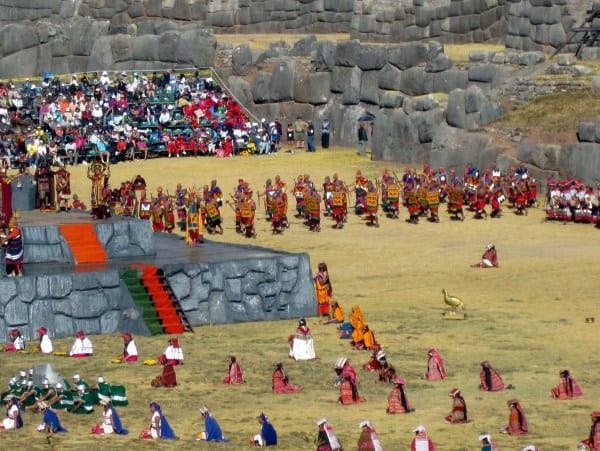 During Inca times, more than 25,000 people would gather in Cusco to celebrate the festival of Inti Raymi. The name of the festival originates from the Quechua language, with “Inti” meaning “Sun” and “Raymi” meaning “festival.” The festivities took place in Haukaypata, which is now roughly Cusco’s main square, the Plaza de Armas. The festival — a vibrant celebration lasting nine days — was led by the ruling Inca. It also marked the winter solstice in the southern hemisphere.

After the Spanish conquest of Peru, Inti Raymi was changed to coincide with the Catholic feast of Saint John the Baptist (in the jungle regions of Peru, June 24 is the Festival of San Juan, or Saint John). Native Andeans, however, continued celebrating the festival in their traditional manner — until Viceroy Francisco de Toledo outlawed it in 1572, claiming it was a Pagan festival.

In 1944, Faustino Espinoza Navarro, a Peruvian academic and founding member of the Peruvian Academy of the Quechua Language, brought the festival back to life. After laboriously studying and translating historic documentation, he created a script for the re-enactment of the festival. Faustino cast himself in the leading role as Inca for 12 consecutive years. The festival has been repeated every year since with increasing verve and recognition.

Nowadays, the re-enactment of the festival lasts about 5 to 6 hours. Starting on the open lawn in front of the Inca Temple of the Sun at Korikancha, representatives of the four Suyos (the four Inca regions) arrive at the temple. Shortly after, the Inca opens the celebrations with an invocation of praise to the Sun God Inti. The royal entourage then leads a procession the short distance to Cusco’s main plaza. A ceremonial reading of the sacred coca leaf then takes place to foresee the fate of the Inca Empire for the up-coming year.

The culmination of the festival takes place in the Inca archaeological site of Saqsayhuman, located in the hills above Cusco. Constructed from gigantic carved stones (many weighing more than 300 tons), Saqsayhuman is an impressive setting for the final re-enactment of Inti Raymi. Onlookers, who are seated in elevated stands, can see the full spectacle of the festivities unfold.

Dressed in full costume, the Inca delivers his final words in Quechua (the native Inca tongue), before a ritual sacrifice of a llama. The festival finishes as the air fills with the sound of horns, panpipes and beating drums. 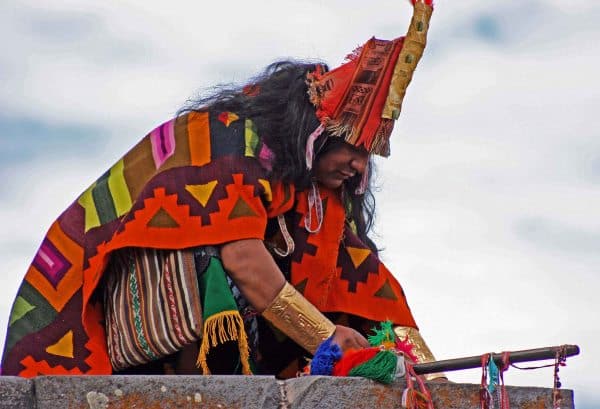 Seeing Inti Raymi in 2013 and Beyond

During the weeks before and after Inti Raymi, the Andean city of Cusco reaches maximum capacity with many hotels charging a premium for accommodations. If you are planning to travel to see this incredible spectacle in 2013, you might find it difficult to secure tickets and accommodation. In general, it’s a good idea to make arrangements six or more months in advance.