Do you know Peru? You think you do?

Well, have you already heard about the region called Amazonas in northern Peru? No, it doesn’t have anything to do with the Rio Amazonas (Amazon River), although that particular river does have its source in Peru. The climate in the Amazonas Region, however, is not what you’d consider Amazonian — the climate is completely different.

Most of the important sites in the Amazonas Region are located at an elevation between 1,400 and 3,000 meters above sea level. Up here, the weather can become wet and chilly, so I recommend packing appropriately: layers, rain gear, good walking shoes, sun block and hat as well as mosquito repellent.

But before you start packing, let me first explain why you should come and visit Amazonas!

Amazonas is an incredible region. You will find several archaeological sites of the Chachapoya civilization, such as the fortified city of Kuelap, the Sarcophagi of Karajia and the Mausoleum of Revash. You can also marvel at two of the world’s highest waterfalls: Gocta (771 m) and Yumbilla (895 m), considered the world’s sixteenth and fifth highest waterfalls respectively. Amazonas is also perfect for nature and bird lovers, for hiking fans and for people that like to interact with the local communities.

For anyone heading to Amazonas, here is an overview of the seven most important sites to visit in the region.

Amazonas is currently receiving a lot of national and international attention due to the imminent construction of Peru’s first cable car system, set to be opened to the public in December 2016. The cable car will run from the village of Tingo Nuevo, located about 16 kilometers south of Chachapoyas, up to the archaeological site of Kuelap, greatly improving access to this impressive site.

The fortified city of Kuelap was built by the Chachapoya culture between 500 and 800 AD. The impressive citadel is contained within 20-meter-high walls on two levels. Altogether, the archaeological site comprises more than 450 round houses and religious buildings, as well as more recent Inca ruins.

Kuelap lies at 3,000 meters above sea level; only 20% of the archaeological site has so far been researched. Kuelap has a special atmosphere, with parts still covered with cloud forest, bromeliads and Spanish moss.

It’s a good idea to hire a local guide at the entrance of the site, who will explain the history and legends of the fascinating Chachapoya civilization. 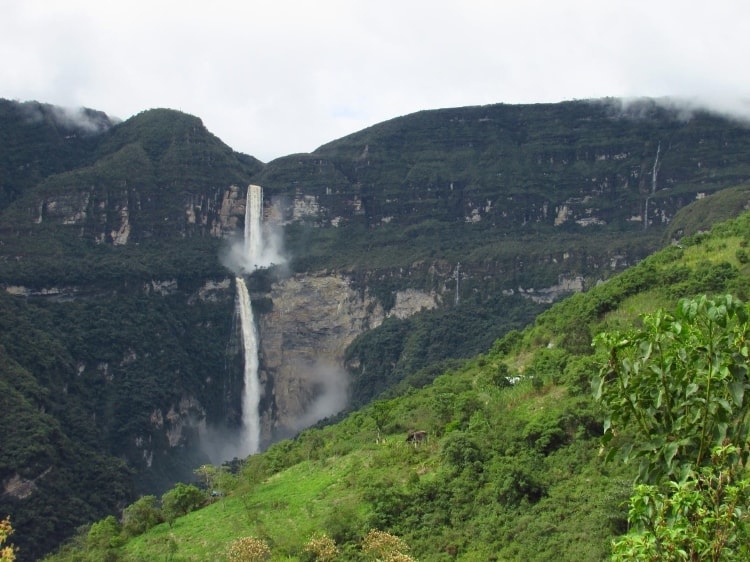 The waterfall of Gocta is the second most visited site in Amazonas. Its waters fall for 771 meters over two drops, placing it among the highest waterfalls in the world.

And did you know that Gocta’s rise to fame began only 10 years ago? German explorer Stefan Ziemendorff measured the height and made an official announcement in 2006. From then on, Peruvians and international travelers have begun to hike to Gocta, first through local agricultural zones, including banana trees and coffee plantations, before entering the primary forest. Once in the forest, look out for hummingbirds, butterflies, toucans and other birds.

The six-hour return hike to Gocta is quite difficult. If you’re beginning to fade, then you might want to hire a horse when you pay your entrance fee. 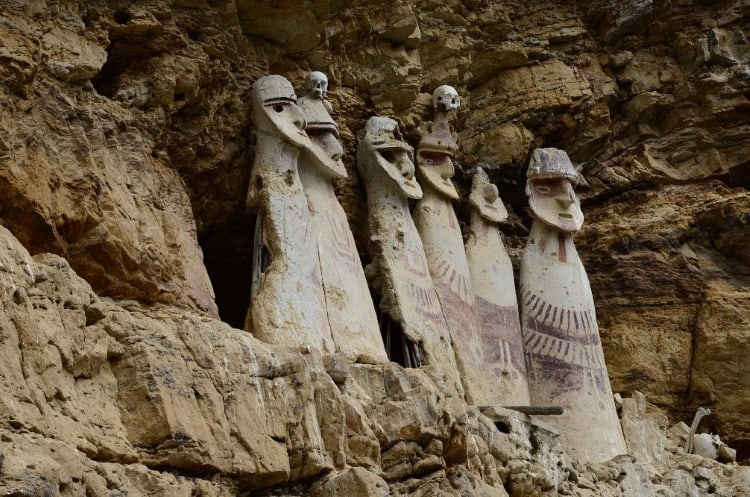 This archaeological site, which reveals a funeral tradition particular to the Chachapoya civilization, is both stunning and surrounded by mystery.

Chachapoyan sarcophagi don’t look like Egyptian sarcophagi. They are over two meters high, are made out of bamboo and clay, and are actually standing up rather than lying down. The sculptures are painted in red and beige and each contains a mummy bundle inside. Researchers now believe that the sarcophagi of Karajia were built only for the most important people of the Chachapoya civilization. One is supposed to contain the mummified remains of the highest official of Kuelap; two other sarcophagi, both decorated with a skull on their top, possibly contain decorated Chachapoyan warriors.

Another mystery is how the Chachapoya cloud warriors could install these funerary sculptures in the rock of the mountain, some 50 meters up in the cliff face. Several different theories exist: they might have built ramps to bring up the materials to build the sculptures on the spot; or maybe they came down from above and then built the sculptures in situ?

These mysteries remain at Karajia, and I recommend you travel there and make your own opinion. The hike to Karajia is only 30 minutes, but the upward trail is a little exhausting. Take your time. 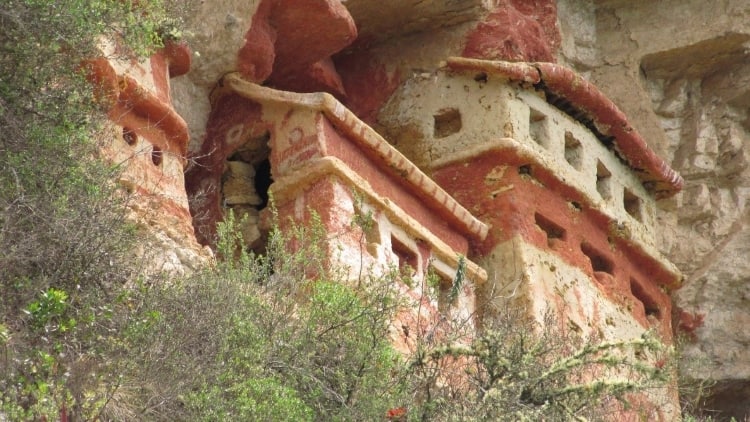 Mausoleums are another funeral tradition of the Chachapoya, more commonly used in the southern part of the Utcubamba Valley.

In this area, the Chachapoya would use mausoleums rather than sarcophagi to bury their dead, with two-story structures built into the cliffs and decorated in red and yellow. Each mausoleum could contain hundreds of mummy bundles.

As well as being found at the Mausoleum of Revash, mummies were also discovered at the Lagoon of the Condors. These mummies are now housed at the Museum of Leymebamba (see below).

The hike to Revash is an easy, starting in San Bartolo and continuing along a trail that is paved along much of its route. You will pass through a beautiful rural landscape with breathtaking views before arriving at the Mausoleum. 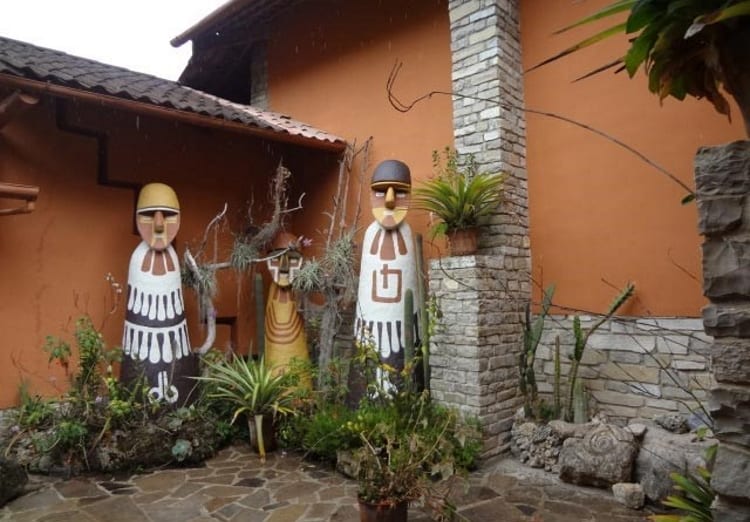 Now that you’ve seen so many archaeological sites of the Chachapoya, don’t miss the Museum of Leymebamba. This is the only place where you’ll find some further explanations about this fascinating civilization, which developed between 400 and 1450 in what is today the Amazonas Region of northern Peru. Some researchers suggest that at its peak, the Chachapoya civilization numbered more than 500,000 people — more than the current population!

The museum of Leymebamba not only explains the history of the Chachapoya, it is also home to a collection of quipus from the Inca period as well as 219 mummies that were found around the Lagoon of the Condors, some 40 kilometers from Leymebamba. 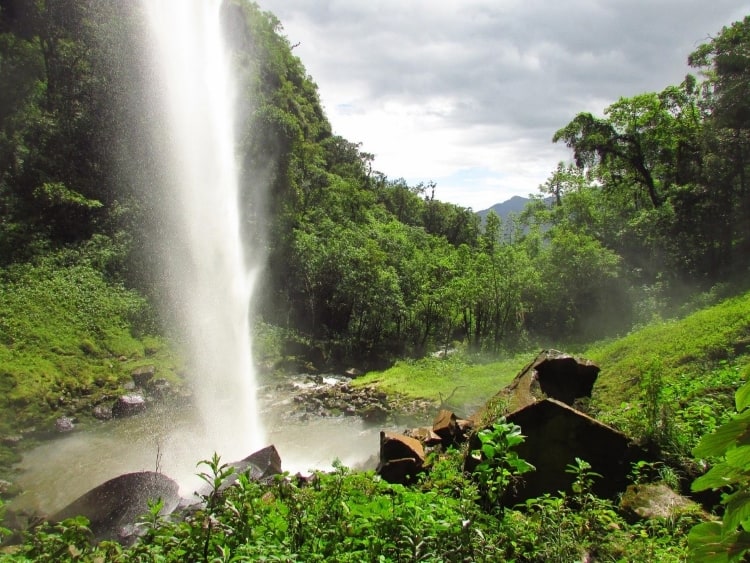 Here’s a little newcomer on the list of sites to visit in Amazonas!

You can get to the Yumbilla waterfall from the little village of Cuispes, just 15 kilometers from Pedro Ruiz. It’s a relatively easy hike of approximately five hours roundtrip. The route will take you to the 895-meter-high Yumbilla falls, as well as the waterfalls of Medio Cerro and Cristal. Keep your eyes open and you might also see a spatuletail hummingbird or maybe Peru’s national bird, the Gallito de las Rocas.

For a relaxing daytrip, bring a picnic and enjoy lunch at the base of the waterfall. For a more adventurous excursion, you might want to book a canyoning experience and enjoy abseiling over the river. 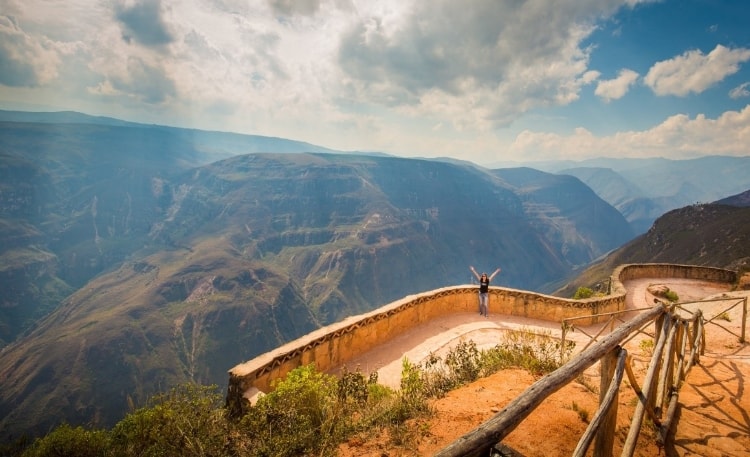 Situated just eight kilometers outside the town of Chachapoyas, the Canyon de Sonche is a great half-day excursion. Take a combi or a taxi up to Huancas, famous for its pottery tradition including earthenware cooking pots and jugs. On Fridays and Sundays, you can see the women from the local associations in their shops, working on their pottery.

From Huancas it is a two kilometer walk to the 900-meter-deep Canyon de Sonche, from the top of which you can enjoy beautiful views over the expansive canyon and the Andes. Bring a jacket, as it’s usually cool and windy.

How to get to Chachapoyas and the Amazonas Region

There are several ways to travel to the Amazonas Region:

Otherwise, you can take a flight to Tarapoto and then a flight from Tarapoto to Chachapoyas with the regional SAETA airline (S/.60). Seats are limited, so book in advance.

You can reach Chachapoyas by taking a night bus from Chiclayo (10 hours) or Trujillo (12 hours). Reserve a bus-cama seat to travel in greater comfort. This way, you’ll arrive in the morning reasonably refreshed and ready to explore the region.

You can also take a bus or combi from Tarapoto to Chachapoyas, which takes about eight hours.

Quick Tip: If this has peaked your interest, and you intend to make plans for a trip to these archaeological sites we suggest you check out FindLocalTrips.com a tour comparison website with heaps of info and all the different options for taking that trip of a lifetime.

This article was written by Martina Capel, co-founder of Phima Voyages, a tour operator based in Chachapoyas in the Amazonas Region of Northern Peru. Phima Voyages specializes in Amazonas and the north of Peru – “off the beaten path.” Small group tours and catered packages are offered covering a wide variety of excursions, including archaeology, nature, and cultural experiences and encounters.