The Lord Of Sipán – Peru’s King Tut | How to Peru

If you asked the average person to tell you what they know about pre-Columbian culture in Peru, 99 times out of 100 they’re going to mention the Inca Empire and its iconic citadel, Machu Picchu. Many don’t even realize that there were dozens of cultures in Peru which pre-date the Incas and had significant influence upon them. The Moche culture, which dominated northern coastal peru from 100 to 700 AD, is one of these impressive ancient civilizations. El Señor de Sipán (“The Lord of Sipán”) is a fully intact tomb of a Moche king, considered one of the most important archaeological finds of the past several decades. The unearthing of this site has been compared to the excavation of King Tutankhamun’s tomb in Egypt–an almost completely intact ancient burial, which is a rare and dazzling discovery.

Quick Tip: If travelling to or from Lima Airport, it is strongly recommended to use the luxury Airport Express Lima bus to get to or from your hotel. Safer and cheaper than a taxi with no baggage limit as well as free Wi-Fi and USB chargers onboard, it is ideal for travellers. 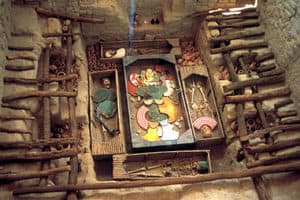 Huacas, natural or man-made monuments of special religious significance, were utilized by many cultures throughout Peru, including the Moche. Huaca Rajada, the huaca where the Lord of Sipán’s tomb was discovered, consists of two small adobe pyramids and a low platform. Authorities became award of the tomb in 1987 when a disagreement between two grave robbers led to their discovery being reported to the police, who raided the site and recovered the majority of precious items from the tomb. This is what makes the site so important.–grave robbing is a huge issue in Peru, so it’s quite rare for archaeologists to have access to a tomb which is nearly complete like that found at Huaca Rajada. What archaeologists found when they arrived was the mummified skeleton of a 1.63 meter tall man, along with the remains of six other people and a veritable treasure trove of jewelry and other riches. The Lord of Sipán, as he came to be called, was adorned with headdresses, necklaces, a face mask, a pectoral, earrings and nose rings–all made from gold or other precious metals. The tomb also contained a total of 451 offerings and ceremonial items, including ornate ceramics and textiles, knives, sea shells and sacrificed animals. Most of these items can be seen at a replica of the original tomb located on the first floor of the Royal Tombs of Sipán Museum.

HOW TO PERU TRAVEL TIP: Save money and stay safe when going to/from Lima Airport by using the Official Bus service inside the Airport called Airport Express Lima
View More 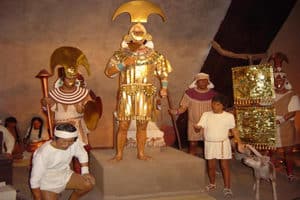 Using their new discoveries along with previous knowledge of the Moche culture, archaeologists and historians began piecing together a picture of this 1700-year-old king’s life. He was somewhere between the ages of 35 and 45 at the time of his death, which matched the average life expectancy for the Moche civilization at the time. He was likely viewed as something akin to a deity by his subjects, who would’ve only seen him in the same regalia in which he was buried: blinding gold and other precious metals. His entourage in the tomb includes a guard with a severed foot (to prevent him from abandoning his post), a young boy, two male warriors, and three women, presumably wives or concubines. A second tomb was also unearthed in 1988, believed to be a Moche priest whose burial was concurrent with the Lord of Sipán.
It will be obvious to anyone who visits the Lord of Sipán that they are looking at something very special. Not only are these artifacts beautiful, but they also give a rare peek into the past, giving us insight into the development of cultures in South America. If you’re traveling in northern Peru, I’d say the Lord of Sipán is an absolute must. 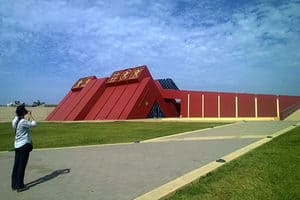 A proper visit to the Lord of Sipán includes a stop at the Royal Tombs of Sipán Museum, which contains most of the original treasures excavated from the site, and another stop at the site of Huaca Rajada, the collection of adobe pyramids where the tomb was originally found. There are a number of packaged tours including visits to both locations which can be purchased in central Chiclayo. Both locations are also accessible by colectivo, for travelers with a strict budget. Colectivos depart for the town of Lambayeque, where the sites are located, from the colectivo station at the intersection of Vicente de la Vega and Leonardo Ortiz in Chiclayo.

There are flights available to Chiclayo from Lima and many other cities in Peru. The most common (and most economical) way to travel in Peru is by bus. There are a number of well-known companies running daily routes to Chiclayo, such as Oltursa. For travel in the popular southern region of Peru, we highly recommend choosing Peru Hop, Peru’s only hop on hop off style service. With Peru Hop, you can book an affordable trip which is totally flexible, stopping at all of the most famous and important attractions of the region. I hope you’ll have the chance to see as many of Peru’s amazing sights as you can!

To book a Tour in Peru we strongly recommend that you use FindLocalTrips.com a search and comparison website for tours across all of South America.