Fake Money in Peru | How to Peru

Fake money is a big problem in Peru — and Peru is a country of master fabricators when it comes to counterfeit cash.

Counterfeit banknotes and coins are common, so you need to be on your guard when dealing with both Peruvian currency (the sol) and the US dollar. Try to get into the habit of always checking the money you receive, and use the following guidelines for identifying counterfeit money in Peru.

Image of a genuine S/.10 banknote, front and back.

Genuine Peruvian sol banknotes have a number of security features:

You can read more about the security details of each Peruvian banknote at the Banco Central de Reserva del Perú website (in Spanish, but with images). 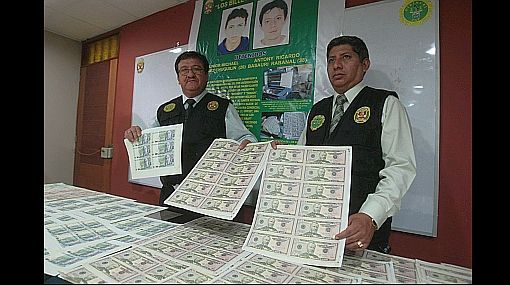 Police in Lima following a raid that obtained half a million soles in fake money.

Knowing what security features to look for will help you identify fake money in Peru, but a thorough examination isn’t always practical. The Banco Central de Reserva del Perú offers further advice for on-the-spot examinations in its “Toque, mire y gire” (“touch, look and turn”) identification guide. Here is an overview in English:

Note: the age of a Peruvian banknote plays a big part in its initial appearance. New notes may look suspiciously crisp and smooth, while the security features on ragged old notes may not be so evident. Bear this in mind when checking a note’s authenticity. 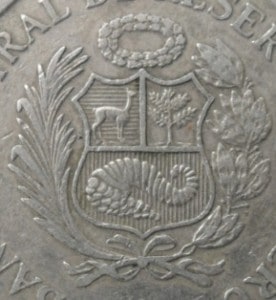 Peruvian coins have not escaped the attention of counterfeiters, but most fake coins lack the detail found in the genuine article. There are a few key areas to look at when trying to determine a coin’s authenticity.

One side of each coin is stamped with the Peruvian national shield. Inside the top-left of the shield is a vicuña, and below it is a cornucopia with coins spilling from it. Look at the horizontal lines behind the vicuña and the vertical lines behind the cornucopia. They should be straight, evenly spaced and parallel. The coins spilling from the cornucopia should also be well defined. Small deformities will occur through wear and tear and minor minting imperfections, but any major defect would signal a fake (the image to the right is a genuine one sol coin).

Any text, logos or numbers on the coin should also be clear, precise and free from defects.

For more information with images, have a look at the Policia Naconal de Peru’s Techniques to Detect Authentic and Counterfeit Coins (Spanish only).

You guessed it… fake dollars are also a problem in Peru, as this report from VICE News clearly reveals.

Counterfeit dollars made in Peru have also had a major impact internationally. In September 2009, Josh Meyer of the Los Angeles Times reported that “Over the last year, authorities and banks have recovered at least $7.8 million in fake notes across the United States that they believe were manufactured in Peru, according to Secret Service statistics.”

That obviously points to some huge counterfeiting operations in Peru, and a flood of fake dollars within the country itself.

For more information about identifying fake US dollars, visit the US Currency Education Program website.

3 comments for “Fake Money in Peru”