12 Best Things To See And Do In Arequipa

Arequipa is considered by many the most beautiful city in Peru, it’s the second most populous city, with a little more than 850,000 inhabitants and not too far from Cusco or Lima.

The golden past of the ancient Incas still seems to shine in the Peruvian cities. But, Arequipa is more than that: it’s the junction of two worlds. The Old World replete with religiosity and brilliance and the New World arose through an aura of mystery and symbolism.

The city of Arequipa is known as the White City, for its particular construction using the white sillar stone, with European influence shown in its great cathedrals, palaces, dwellings among others. Arequipa is located in the south of the country, south of Ayacucho, Apurímac, and Cusco and to the west of Puno, at an altitude of 2335m.

Arequipa, besides offering diverse landscapes and touristic places, it’s the second most important city of Peru due to the great number of inhabitants, and also, for many travelers, the next point of their travel after Lima or Cusco.

The National Reserve of Salinas and Aguas Blancas

This national reserve is located in a volcanic mountain range composed of several volcanoes like the Misti, Picchu Picchu, Chachani, Acune and Ubinas. In this zone, one also observes mountains, snowy lagoons and humid meadows among others.

This reserve covers 366,936 hectares and is located at 4300m above sea level. To fully discover it, take the route that leaves towards Yura-Juliaca by the old road of Cabreria of Arequipa. 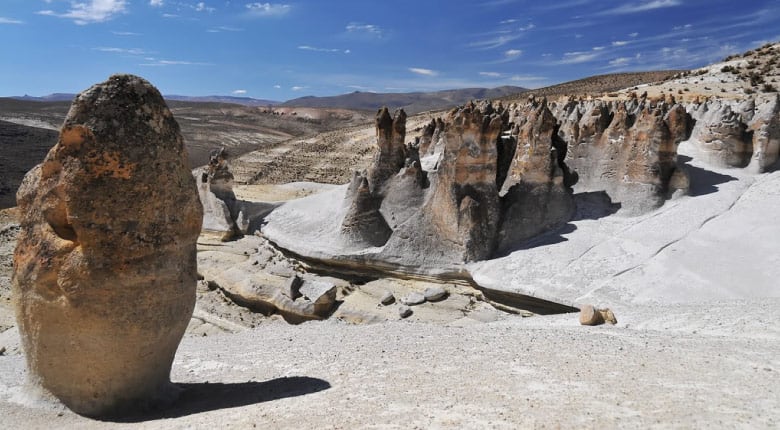 One of the main tourist destinations in Peru, this canyon is the second deepest in the world. Colca Canyon offers spectacular landscapes, archaeological remains, small colonial villages and the most interesting and important is the flight of the Andean condors at sunrise with the reflection of the low sun and blue sky. An ideal place for nature lovers.

To appreciate all that the Colca Canyon offers you should go to the Colca Valley located 151km from the White City of Arequipa and 3 hours by bus. It is usually advisable to rest overnight in the Colca valley (Chivay) to enjoy the fabulous flight of the condors. 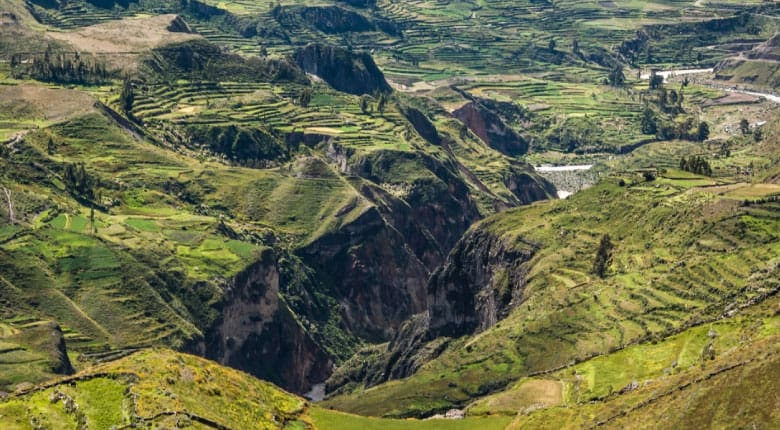 The Old Church of San Miguel Arcángel in Cayma Village

It’s interior features paintings from the Cusco School. The Village of Cayma is located at 2403m altitude and, because of its privileged location, offers a spectacular view. In the Balcón de Arequipa one can carry out different adventure sports.

Better known as the south-eastern port of Arequipa that offers a fantastic view of the three volcanoes of the city: Misti, Chachani and Picchu Picchu. In addition, it has ample platforms. One can also observe preserved colonial-style villas where an immense mill built in 1785 is located.

The Sabandia mill was built with sillar material and its architecture shows the work of the locals and continues to function in the same way as it used to process wheat in the old days, with huge stone wheels. The south eastern port of Arequipa is located 8km south of the White City, in the Sabandi District, province of Arequipa, 30 minutes by bus. Salinas and Aguada Blanca National Reserve The main objective of this reserve is to conserve the area’s natural and scenic resources. Generally guarantees the protection of the habitat of the vicuna, llama, guanaco, alpaca and taruca of the region.

The main square of the White City of Arequipa is located in the Historical Center of the city being one of its main public places. The Heart of the White City, considered one of the most beautiful squares in Peru and all of Latin America, surrounded by Cathedral to the north, Three Portais to the east, south and west, Company Church to the southeast and center to main square with its beautiful three-plate bronze fountain crowned with the figure of a soldier of the sixteenth century. 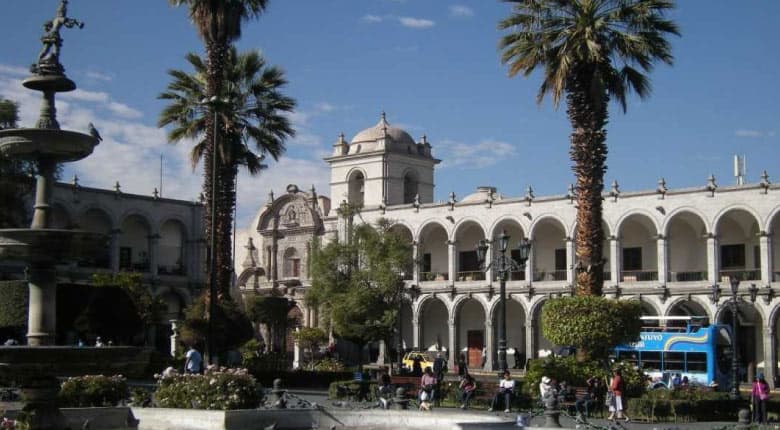 The Arequipa Cathedral is considered one of the most important religious monuments of the 17th century in the White City. This monument was built with rock of volcanic origin and neo-renaissance style with European influence occupies the entire north side of the main square. The cathedral suffered several serious damages due to the earthquakes of 1606, 1666, 1668, 1687 and 1784. After a reconstruction it underwent a fire in 1844 and only in 1868 it was rebuilt again by an architect from Arequipa called Luis Poblete and in 2001, again suffered an earthquake that affected its towers. 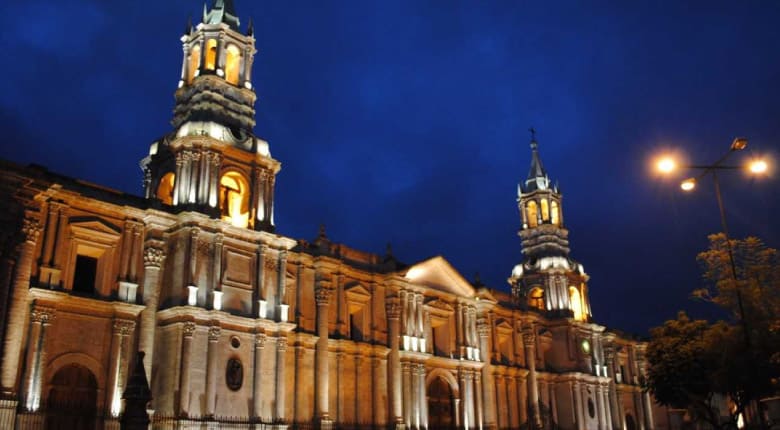 This is one of the many churches that are in the White City. The church and Company Complex is located between the municipal portal and the Flores portal. Inside we can see valuable objects of carved wood clad in gold.

The construction of the church and complex of Company began in 1590. Under the direction of Brother Felipe, the church was completed in 1698. Its architectural design was conceived by Gaspar Báez in 1573. Within this church there are 66 pictures of the Cusquenha school two artists Bernardo Bitti and Diego de la Puente.

The most representative neighborhood of Arequipa is the oldest in the city. With its narrow streets and houses built of sillar stone and small circular squares decorated with various types of flowers, among them geraniums.

This old quarter is located 5 blocks from the Plaza de Armas of the White City of Arequipa. The neighborhood of San Lázaro is considered Cultural Heritage of Humanity.

Also known as the Convent of Santa Catalina, it dates from more than 4 centuries and opened its doors to tourists in 1970. It was built on a plot of 20,000m2 and founded by María de Guzmán with the support of Viceroy Francisco Toledo. The place was chosen for its natural beauty, the warm climate and the unique material layout that is the sillar.

This convent was built to house the daughters of the most illustrious families of Arequipa. The women who entered as monks in the Monastery were Creoles, half-breeds and daughters of “curacas” (traditional doctors). In 1964 the first Spanish nuns were admitted. The story goes that poor nuns and ladies of the city also entered the convent. 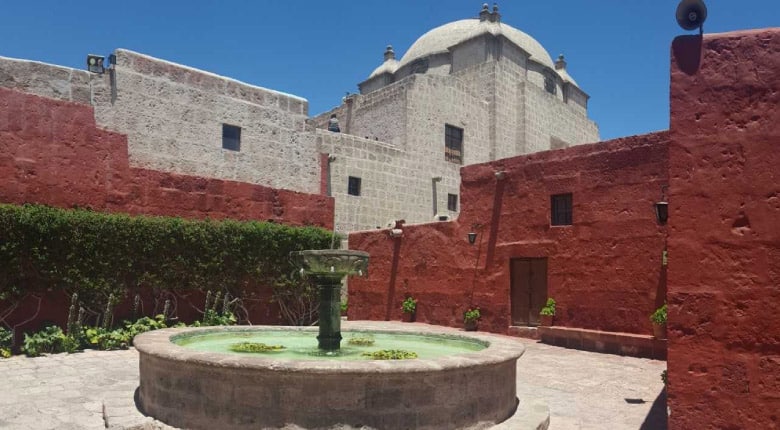 They were built during the time of the Incas as places of rest and restoration of the commercial routes.

In the White City there are many inns, most of them located around the Bolognesi Bridge. Formerly, they were a gateway for many rural workers arriving in the city of Arequipa from the coast and the Peruvian mountains.

Many of them can still be seen as testimony to the success of Arequipa’s commercial histories.

This belvedere has a set of beautiful arches built of stone sillar and today have become a must visit for many foreign travelers. From this viewpoint, built in 1972, you can see the wonderful view of all of Arequipa including its three volcanoes. Besides, it’s even more incredible when the sky is clear.

Yanahuara is situated 2km from the city and has narrow stone alleys and old houses built of sillar. What stands out from all the rest is the Yanahuara square where the arches with a spectacular view of the entire White City and its three volcanoes are located: Misti, Chachai and Picchu Picchu.

If you want to know the best way to get from Lima to Arequipa, then keep reading! 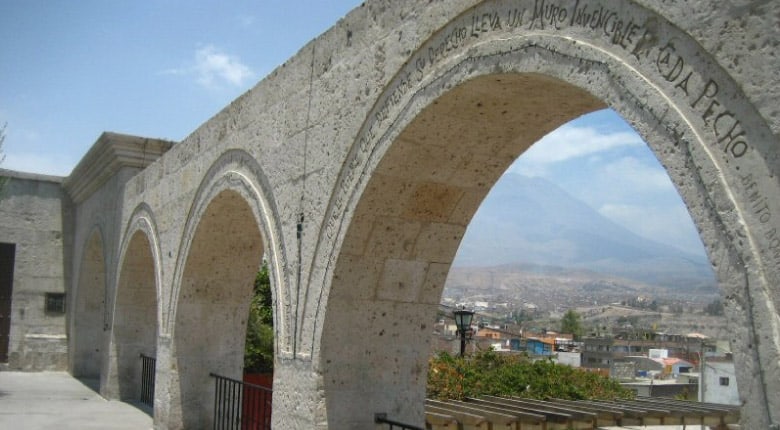 So, if you want to see more options, go Hurb: we value what is important: you.

This is a guest post from our friends over at Hurb. Make sure to check them out!